Can We Really Trust NAR When They Revise Their Home Sales Figures?

Late Tuesday after, CNBC reported that the National Association Of Realtors released a statement acknowledging that their home sales reports have been OVER-COUNTED since January of 2007. That means everybody who relies on REALTOR reports for the US housing markets now knows that things are worse than they previously thought. Who would have thought such a thing could occur? [insert dripping sarcasm tone]

All the sales and inventory data that have been reported since January 2007 are being downwardly revised. Sales were weaker than people thought -NAR spokesman Walter Malony

Basically, the NAR does not cull all of the home sales data that is readily available from the MLS systems nationwide and report from these figures, they gather a sampling and then have a benchmarking algorithm that supposedly provides a fair interpretation of the overall market. This was a great system to have in 1950, when all MLS's were paper-based, but perhaps they should consider something a little more current.

Can We Really Trust NAR?

Long-time readers of the Tallahassee Real Estate Blog know that I report the NAR spin each month that Lawrence Yun produces in order to tell the public why the most recent set of housing market data is good news. While I understand they are the lobby for the REALTOR organization, I do not think an organization (My Organization!) should put themselves in a position to purposely misguide its 1+ million members who need to have an awareness of the market so as to council their clients.

For readers who do not really follow regular housing reports, each month it goes something like this:

On Board The NAR Titanic 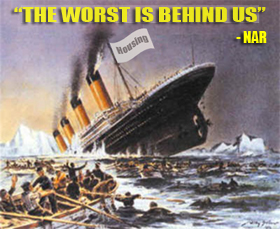 Lawrence Yun: It's a sunny afternoon, it's a great day to be cruising the Atlantic!

Lawrence Yun: Actually, icebergs exist all through this area, it's a great day to be cruising the Atlantic!

Lawrence Yun: All ships get wet, it's a great day to be cruising the Atlantic!

Lawrence Yun: The Titanic is un-sinkable, it's a great day to be cruising the Atlantic!

OK, perhaps a bit over-stated (pardon the pun), but I gave up trusting NAR long ago. I know that the Tallahassee real estate market is a relatively small market (when compared to NYC, Chicago, etc.), but we have been a fair bellweather for the rest of the housing markets and I will trust what I can measure. I not only look at data from the Tallahassee MLS, but I also compare it to the Tax records which records all of the property transfers in our housing market. This means that the reports I pull are as accurate as can be prepared.

Our pledge at the Tallahassee Real Estate Blog is to provide charts, graphs, and analysis of the housing market, without the spin. You can always leave comments below each blog post, and we make certain to follow-up with any questions. If you are in a position to be selling a home or buying a home, we can help you apply this market knowledge to your tactical advantage when it comes time to "making the best deal possible."

We've been dealing with that here too Chris. 2nd mortgage blackmail ...

I agree 100% !
What stinks is that for most agents NAR membership is required. For now I reluctantly pay but I am working toward a position where I can tell NAR no thanks.

Yeah I agree Bob. Our Realtor lobby does a lot of good though (like fighting for tax benefits for home ownership). They own us if we need access to MLS in most areas though...

I am 59 years old and got in the RE business in 1978-Do you remember the coak strike? My classes were halted a few months because of it! In 1980 I became a Broker but soon started doing appraisals-I have worked for myself over 33 years now and in 1996 started publishing a modest year end market report for NW Indiana and SW Michigan where I work-I went thru the early 2000's when FNMA came out with their "we do not need appraisals" position-We lend based on the borrower they would all say! That worked when they had a job! I went thru the Carter years as well when a "blended" 13% rate was advertised like a Kardashian wedding

I am now completing my year end 2011 report which covers two MLS systems and about 35-40 communities-I provide a 6-8 year analysis of annual sales and prices along with market times and list price ratios-What I often noticed is the data I compiled did not match what I would read in the press-Recently I learned why and why NAR had bad numbers is beyond me-Just another lesson to be learned by those of us in the trenches-Trust nobody!! Push data that aids your cause-That seems to be the theme today

My 2011 report looks at NW Indiana cities like Gary, Hammond, East Chicago and Whiting and the declines are dramatic since 2006-Going east from there you find Michigan City and in Michigan New Buffalo-All of these markets enjoy casino gaming the past decade-And all of these area find crushing real estate activity! Yet the County in between these areas which is Porter see declines far less and it is clear casino gaming, whatever it's beneifts, does not aid the real estate market

Year end 2011 finds nearly 100% decline the areas I analyze-Single family or condo the results are the same-So where are the gains? Not In NW Indiana or SW Michigan I can tell you

It's great to find another in our industry that actually measures the market. Very interesting stuff Alan, thanks for sharing.