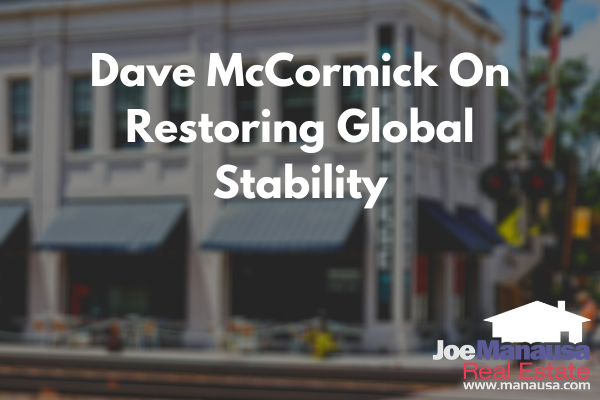 It's not everyday that you come across a video on the internet and see a college classmate from over 20 years ago. But that is exactly what happened to me this past week. Dave McCormick (my West Point classmate from 1987) is the Treasury Under Secretary for International Affairs and he was featured on CNBC to discuss what the government plans to do to restore stability in the global markets. 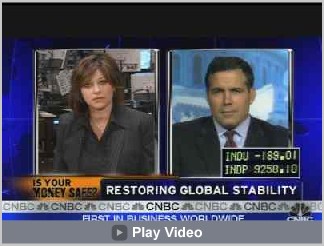 Under Secretary David H. McCormick made the following remarks about the current economic turmoil while speaking at Wharton's Eleventh Annual Investment Management Conference. He identified how the chaos basically got started and acknowledged that we are now paying the price. If you would like to read Dave's comments in their entirety, please go to the Press Release issued with Dave McCormick's remarks on market turmoil.

The seeds of the challenges we face today were sown many years ago, beginning with a gradual weakening of lending practices by banks and financial institutions and by greater willingness by borrowers to take out mortgages they couldn't afford. These factors, combined with growing complexity and opaqueness in our capital markets, are at the heart of the current crisis.

What Caused The Market Meltdown

In a nutshell, everybody was making money in a seemingly "low risk" market, so investors around the world kept seeking higher and higher returns.

Regulators and investors alike showed a growing complacency toward risk. These factors blended into a dangerous cocktail of underlying conditions ripe for instability.

This imbalance between risk and reward was most evident in the U.S. housing market, where lenders significantly loosened credit standards, particularly for a new generation of adjustable-rate mortgages. Yet aggressive financial innovation went well beyond mortgages. Banks and brokers created an alphabet soup of products with simple names like CDOs, CLOs, and SIVs, which were in fact complex and opaque investment products and structures. Credit-rating agencies responsible for assessing and rating these assets, as well as investors who purchased them, failed to question the chances of these underlying investments going bad.

Actions The Government Has Taken To Stabilize The Market

The Government Has Made Policy Changes To Help Restore The Market

While the cost for credit continues to rise as its availability decreases, the Federal Government has acted to provide capital and liquidity in the hopes of stabilizing the markets. The following are the three components of the plan initiated by Secretary Paulsen and Chairman Bernanke:

Under Secretary McCormick concludes his remarks by warning against protectionist policies while extolling the necessity of the government to act now!

Ladies and Gentleman, now is the time to act quickly, decisively, and collaboratively with regulators and market participants around the world to restore stability and confidence to our markets.

The interdependence of our global economy makes this challenge more complex, and it also makes our work with international counterparts to promote growth and financial stability all the more important. I'm confident that our leaders and our great country are up to this pressing challenge.

If you would like to see the Under Secretary's remarks in full, please follow this link to the Press Room of the U.S. Department of the Treasury.

Thanks Eva. I agree with your "measuring stick," and it will remain to be seen how well Wall Street deals with this over the coming months.

Joe - Nice article. And it appears that the actions taken by the Administration, Congress and other countries have finally reached the critical mass to have an effect. My meassuring stick? Wall Streets actions today.

Thanks for the concise explanation. I hope a lot of people read it.