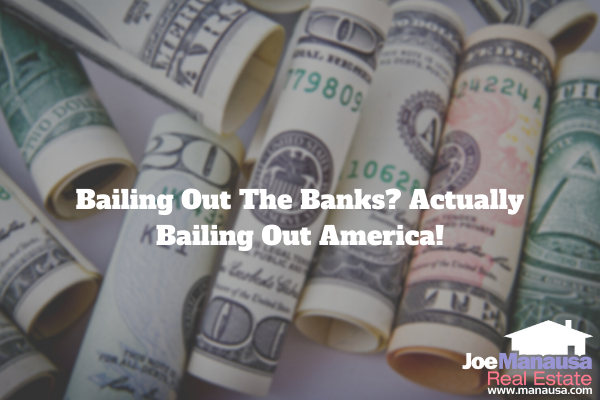 Today's Tallahassee real estate blog is going to be completely different than most our readers have come to expect. I will summarize a letter that I received from Jay Hill of Hill Commercial Capital, explaining in layman's terms why the big bailout must occur. I respect Jay's intellect and insight in the money markets and I think our readers have much to gain from his view.

There Is More Than One Type Of Bank

In order to understand the mess the credit markets are in, one must understand how the tier of banks exist in our country. They are:

The Chronology Of The Banking System Failure

It's not just home mortgages that are frozen. The U.S. trades on credit. The CMBS markets have been slowed and they help finance business credit lines. The reason why this Bailout has to happen is that it is not just bad mortgage lending that is seized up... it's also lines of credit for businesses, major manufacturers' lines of credit that they use to operate on a daily basis, borrowing and paying up and down lines to transact business every day. On a large scale, that's Ford Motor Company's payroll that comes in on lines of credit to cover the individual payroll of the workers. If that market tightens any further and seizes up, it will have an unmanageable trickle-down effect to the pocket book of every individual. It's going to seize up the ability of the major manufacturers, the major employers, to function on a day-to-day basis. Retailers use those lines of credit to buy goods from wholesalers. They buy all of their goods on credit! You see, it's not "Bailing Out The Banks" it is "Bailing Out America."

Keep checking out the Tallahassee Real Estate Blog every day for updates that include charts, graphs, and analysis of the Tallahassee real estate market.If you like this Article then please subscribe to my blog through a full RSS feed, or you can

Great summary.
Of further interest I understand the Bill includes a $7,500 tax credit for home buyers. It is not really free as it is a interest free loan paid back on your taxes over 10 years but it is an immediate tax credit. If it passes it seems it would help a home buyer reduce out of pocket down payment expenses.

Thanks Trent. The $7,500 tax credit for first time homebuyers (and people who haven't purchased in a while) is actually already passed in the previous Bill signed by the President and we covered that in a previous blog http://www.manausa.com/blog/31/hr-3221/.

This page contains examples of headlines that have been used in the past. Use them to "inspire" yourself to create great ...