Home Ownership Rate On The Decline In US 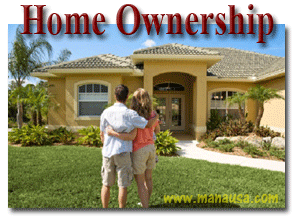 According to the US Census Bureau, the home ownership rate is on the decline in the US, and their most recent report showed that the current rate of 65.9% is the lowest recorded since 1998. The fact that the home ownership rate is dropping should come as no surprise, as nearly 70% of Americans owned their homes at the height of the US housing boom. The US Census Bureau news released "RESIDENTIAL VACANCIES AND HOMEOWNERSHIP IN THE SECOND QUARTER 2011" just last week stating:

Normalization Of The Home Ownership Rate

We should expect to see a "normalization" of the home ownership rate over the next few decades. The political push for an increase in this statistic was promoted by Democrats and Republicans alike over the past 50 years and I believe was a major contributing factor for the housing market bubble that exploded in 2006. The Clinton administration was perhaps the first to make this a priority primary mission of HUD, especially for minorities and low-income families. That tasking was carried out through subsidy programs and through the two government sponsored entities, Fannie Mae and Freddie Mac.

The political push for higher home ownership rates created a demand for new loan products (for those who would not qualify under traditional lending programs) and we all know how that turned out. The housing market must now move forward by embracing the standards that proved to be successful for a very long time, and that means we will see a further and significant decline in the rate of home ownership in America.

As more families choose (or are forced) to rent, the balance of power for control of rental rates will begin to slide back to property owners. Rental rates will be controlled by a smaller group of owners and I believe this means we should gear for rent inflation at higher levels than have been seen over the past twenty years. Real estate investors will be lured back into the market as returns will become far more favorable.

There will still be a period of adjustment for most US housing markets, as scores of distressed properties must still be sold and the balance between supply and demand comes back in line with the cost of replacement for homes. Rising rental rates might be held in check due to the current supply imbalance, but once it clears over the coming years, renters should expect to see significant hikes in their rental rates. The home ownership rate will still continue to decline back to historical norms, but families will find the cost of owning a home will still be the best deal in most towns.

Joe Manausa Real Estate is a brokerage company headquartered in Tallahassee, Florida. Its unique business model provides specialists to both home sellers and home buyers, and the results speak for themselves. JMRE has significantly more 5-star reviews on google than any other local competitor. Joe Manausa Real Estate is a leader in internet marketing and utilizes search engine optimization, email marketing, social media and data analytics to get their clients’ home sold faster and for more money than any other Tallahassee brokerage firm. For more information, visit www.manausa.com or call us at (850) 366-8917.

I agree that home owner rates are under attack, but for additional reasons. Large corporations are sucking up inventory on a never seen before scale. Big money is denying individuals the right to home ownership. Small and midsized investors are even being priced out many markets.