Which Tallahassee Subdivisions Should Expect The Most Foreclosures

In case you missed the announcement this weekend, we just released our foreclosure reports for the month of June.

During the process of compiling all of the lis pendens filings for the report, I felt it would be a good time to create a graph showing the Tallahassee subdivisions where we should expect to find the most foreclosures in the coming year.

While many of the "usual suspects" are listed, there were a few surprises as well.

Tallahassee Subdivisions With The Most Foreclosures

The following real estate graph shows the Tallahassee neighborhoods with the most lis pendens filings over the past 12 months.

Most are not surprising, as this group for the most part mirrors the top selling neighborhoods as well. 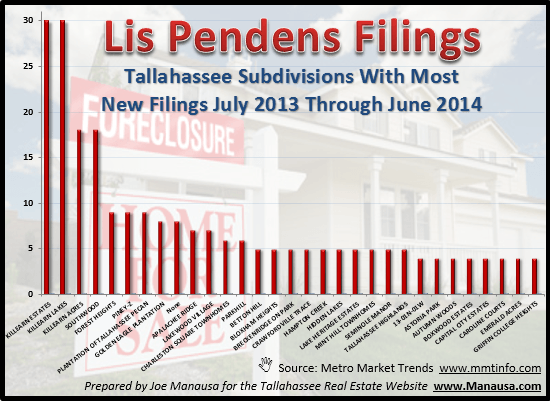 The are some popular neighborhoods notably absent from the list of new foreclosure filings.

How To Use Lis Pendens Announcements

If you are not in any hurry to move, and you know where you want to live, you can use our weekly lis pendens reports to search for potential up-and-coming distressed properties. Recently, the following reports were filed:

If you want to know more about Tallahassee foreclosure trends, we also publish monthly summaries which include a list of all lis pendens filed for each respective month.

And for all of our data lovers, we also compile quarterly and annual reports

So take the time to check out the distressed properties that will likely be entering the market over the next few years. These properties still represent more than a quarter of the inventory that is selling, so it's a great way to get a leg-up on your buying competition. Often times, these properties hit the market and sell in the first few hours, so knowing what to expect allows you to make a decisive move without having to make a panicked offer.

Of course, the best way to buy a foreclosure in Tallahassee is with an experienced buyer's agent. If you would like to start planning for buying a property below market, just drop me a note and we can schedule a time to start you on your way towards a successful purchase.