As we approach the end of May, I was curious to see which Tallahassee subdivisions were getting the most attention from homebuyers.

It turns out the neighborhoods that we typically see as most active still are … but they are in a different order in 2014.

Currently, the top selling area in Tallahassee is Killearn Lakes Plantation, and the number two is not the one you might expect.

The average price of a home in Killearn Lakes Plantation in 2014 has been $196,000 ($113 per square foot of heated and cooled space), which is a good bit lower than the second most active neighborhood.

Killearn Estates has seen one fewer home sold than our top subdivision, at an average sales price of $228,000 ($105 per square foot). 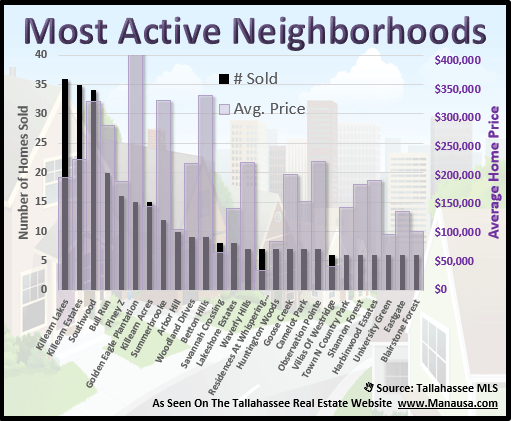 The second graph is similar to the first, however instead of average home sale prices, this graph shows the average home value sold in each neighborhood. From left to right, we observe the most active to the less active top 26 neighborhoods in Tallahassee. 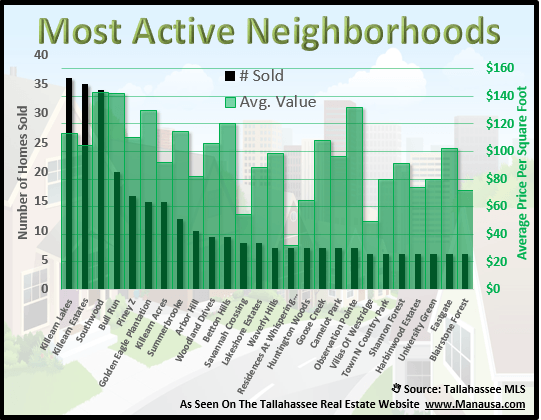 Southwood comes in at the #3 position with an average price of $330,000 ($143 per square foot). For the past several years, either Killearn Lakes Plantation or Southwood has filled the top position, and this year looks to potentially be the same. Currently, Southwood is only two sales back from Killearn Lakes on the top neighborhoods list.

If you don’t see your Tallahassee subdivision on this list and want to know more about home values in your area, just drop me a note and we’ll answer your questions as best we can.