Expect More Realtors In Tallahassee In 2016

Every so often, we like to examine the production of Tallahassee Realtors in order to forecast industry employment changes in the coming year.

Unlike many industries where the overall market production is an estimate at best, the home selling industry is far easier to track. We merely need to measure production through two separate reporting agencies (in our case, the Tallahassee MLS and the Leon County Property Appraisers Office), and then make a few comparisons.

As I happen to be married to a Realtor in Tallahassee, I'm am excited to report that the average home selling production is on the rise and has reached 6 home sales per person, the highest it has been since November 2006.

Here is what we are seeing above. The yellow line shows that 77% of all home sales recorded with the Leon County Property Appraiser also appear in the Tallahassee MLS. Simply put, this means the Realtors are involved with at least 77% of all home sales (Realtors are not required to put home sales in the MLS, so if they sell a house prior to the beginning of marketing, it is possible it will never be entered into the MLS).

Look at the spike in the yellow line in 2007 when the market plummeted. Home sellers starting hiring Realtors at a higher rate. As a side note, I would discount the data recorded prior to 2000, as many Realtors in Tallahassee had not embraced the computerized MLS and many of the home sales were never entered. Today, I believe more than 90% of Realtor sales reach the MLS, even if just to report a sale that has already occurred.

So I look at this information and know that home seller confidence right now is low, as the use of Realtors is stable and close the its highest rate in the Tallahassee real estate market

We have been reporting that the market is rising in Tallahassee, but that does not always mean that Realtors are (each) selling more homes. As the market improves, more people activate their license and join a real estate company in Tallahassee. When the market toughens, we typically see the sales force reduced.

In the graph below, two separate trend lines are shown (trend line means each point on the graph represents 12 months of information as an average). The blue bars show the average number of Realtors in Tallahassee over the past twelve months (measured on the left vertical axis), while the red line shows the average number of homes sold each year per Realtor (measured on the right vertical axis).

With the market improving and per-person productivity on the rise, I would expect the second part of 2015 and all of 2016 to be big months for new agents entering the business (as well as many older agents returning to the market).

What This Means For Consumers

One thing that does not change with market cycles is the need for consumers to interview Realtors when it comes time to buy or sell a home in Tallahassee.

Roughly 2/3rds of all new home sellers hire the first agent with whom they speak, and they often regret not doing some research before committing to pay a Realtor tens of thousands of dollars.

If you think you might be ready to move, whether you have a home to sell or not, just drop me a note and we will set up a time for you to evaluate the many ways that we can save you money. 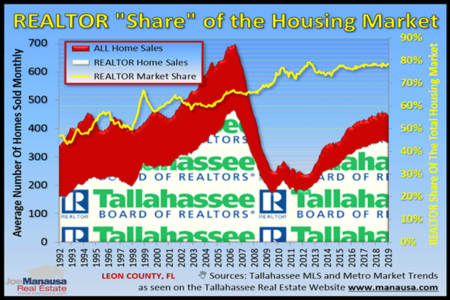 Are You Selling A Home In Tallahassee?

If you are planning on selling a home in Tallahassee, you might want to bone-up on market conditions in order to see what is ...

Tallahassee Realtor Sales Are On The Rise In 2015

It's time again to check out how productive Tallahassee Realtors have been in selling homes in Tallahassee.This is a report ...