Does Housing Have To Move With Population Change? 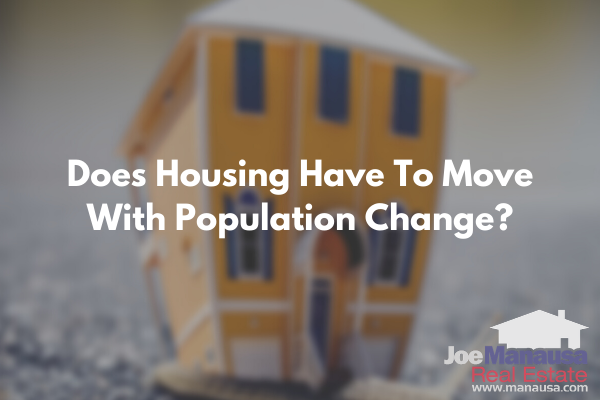 Today's Blog is actually a request, from me to you, to engage in an open discussion for the betterment of all of our readers (and blogger) alike. I have always assumed that a market that has a growing population should see a growing housing market (over the long haul) and reciprocally, a market that has a receding population should see a declining housing market.

As we can see from the graph, Tallahassee has continued to see a healthy increase in its population. Both Tallahassee as well as the State of Florida have seen their growth rate slow down, but growth is occurring nonetheless.

Many around the state speculate that Tallahassee is just one large new employer away from an explosive growth event. I have spoken with a few regional investors who feel that due to our proximity to the I-10 cooridor as well as a natural juncture between Atlanta and Orlando, that Tallahassee is situated in a great location to facilitate regional expansion. And just as South Florida has melded into 1 large populous mass based upon I-75 and I-95, many foresee a similar parallel for Jacksonville, Tallahassee, Pensacola along I-10. Does this mean that one day everything in Florida will be either "South Florida" or "North Florida?" 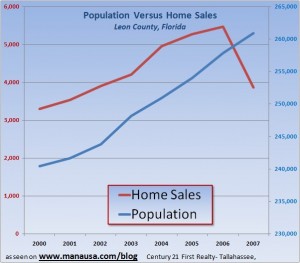 As I mentioned in an earlier post about how poor Tallahassee home sales were in July, I am surprised that we have seen such a drop in the Tallahassee housing market. Sure we had a large, two or three year bull-run on the market, but look at how the population growth ran during that same period of time. The large dip in the Tallahassee housing market seems to be especially severe considering that our growth in people is on a seemingly continuous climb. So, now this brings me back to where today's blog began.....

Using the "Leave A Reply" section below, please share your views, beliefs, or opinions on whether or not we should expect a long-term relationship between population changes and the housing market. In other words, what are your thoughts on:

The rate of population growth in Tallahassee should (or should not) parallel the rate of growth in home sales.

You can't argue with facts...but it begs the question: has there been an increase in the rental market for the period in question?

I don't know if this is relevant to your area, but what I'm observing in Westchester is a very slow market in spite of the fact that it is an extremely desirable location - just 20 miles and 30 minutes by train from mid-town.

Many buyers got a "fire sale" mentality. In their minds the prices just HAD to tank...they just HAD to. So they sat and waited smugly in their rentals for a falling knife. Then they were going to steal a house dirt cheap and have a very sweet deal. Great idea - trouble is it hasn't really worked out.

The demand is simply too great for the area overall and the exotic loans that plagued FL, CA, AZ and NV just weren't a big enough issue here - at least in places where people wanted to actually LIVE.

The result was that sellers in desirable areas were in no hurry to sell and had no desire to lower the price. They yanked their homes off the market reducing inventory. What is on the market moves - though far more slowly. Prices have gone down slightly, but that huge bargain everyone has been waiting for never materialized. There was also a wild increase in demand for rentals. Landlords took note and jacked up rents to levels that make your jaw drop. 9-11% a year increases over two years have dampened the spirits of those who think that waiting is good. Feeling the squeeze in their rentals - tenants are realizing this may not have been such a great idea after all. With credit tightening and down payments up, and more income being swallowed by rent, they are scrambling to get OUT of the rentals and into something where outlay is stabilized. Right now prices are flat, but they should start going back up when the credit crunch starts to lift. The market in my immediate area is probably going to go bonkers when that happens.

Real estate is LOCATION, LOCATION, LOCATION... people forget that at their peril. People may be waiting for a falling knife and to steal a deal in your area as well. If the geography is as you describe, they will eventually wake up to the fact that this is a no-go and start buying again.

Great question Chuck. As a matter of fact, vacancies are up a bit too, which is really puzzling. I'm thinking that the only common-sense answer is that new home construction out-paced population growth over the past few years and grew our inventories. But everything I've read is that population growth over the past three years has been much stronger than historically normal....

Thank you Henry, I appreciate your feedback.

Thanks Ruthmarie, you sound like you are in a very stable area as well, and certainly stronger than here. We did not have the run-up on the rental units.

Hey Diana, that is a shame. It seems to me that parts of California are always either booming or busting (of course, I am not a California expert by a long shot). I remember reading that townhome prices in San Francisco were "Down To" under $900 per square foot. Wow. That kind of money buys you the nicest home in Tallahassee on acreage, downtown!

This is an excellent analysis of the housing situation in Tallahassee. From the media is seems that everything is gloom and doom and this is obviously means there are still gems in America

Joe, where are you getting the "vacancies are up" data?

I don't dispute that, but of my 28 or so rentals all are full and rental rates are up, particularly for the 1br's of which I have 21 across 3 different parts of town. I feel like I'm seeing some of the prospective buyer's who can no longer get financed (or are too scared to) filling the rentals, but that is just my gut based on renter feedback in the trenches. I know you probably have access to more reliable data. Just curious where you find it?

That's some great news Chris, thanks for the feedback. We manage about 1,000 units and have seen some pressure on rentals around the university due to what I felt was speculative building of 4BR and 3BR units. Many of these are renting out to less than 4 or 3 students respectively, and that creates a trickle-down affect across the whole rental market. I'll review this again now that I received some good "rental market information" from you. Thanks again.

I think, the sales of homes not only related with the population ?but also related to economic situation and income level.

Many thanks for sharing superb informations. Your websiteis so cool.I will be astounded by the main points that you’ve with this blog. It reveals how nicely you perceive this subject. Bookmarked this web page, will come backfor extra articles. You, my pal, ROCK! I discovered this is the info I already searched all around us and merely couldn?t discover. Exactly what a ideal website. I prefer this web internet site as well as your website is undoubtedly considered one of my new favorite ones.I love this fabulous website given and possesses given me some sort of dedication to have success for most purpose, so thanks 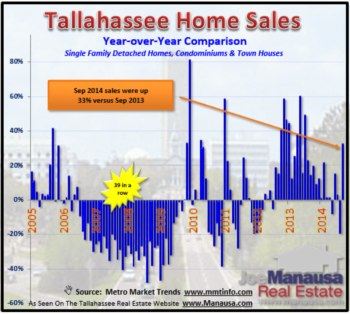 Year over year home sales in the Tallahassee MLS improved by 12.7% in December after showing a 1% decline in November....

Year Over Year Homes Sales Up 33%

I have been waiting nearly three and a half years to write a headline like that. With all the year-over-year declines that ...