How To Decide Whether To Sell Or Hold Real Estate

Recently, a long-time reader from out of State (Robert) contacted me to ask for help. Robert had purchased a residential lot in Tallahassee with the intent of relocating to Tallahassee and building a home. With the turn of the economy, Robert believes that he might not be able to move here for another 3 to 5 years, so he asked me if he should sell or hold his real estate.

My initial reaction was to ask if he thought he would ever move here. Robert indicated that with family in the area, he would still like to move here, but will have to wait for better economic times. I told Robert that I would take a look at the lot but believed that he was going to be better of just holding it until he was ready to build.

The following case study demonstrates the process that I would encourage Robert (and anybody in Robert's situation) to use in deciding whether to hold or to sell a lot in Tallahassee.

When we look at historical lot sales in Tallahassee, we see prices jump up more than 300% from 2000 through 2007, only to see them drop back down dramatically ever since. So why such crazy behavior? 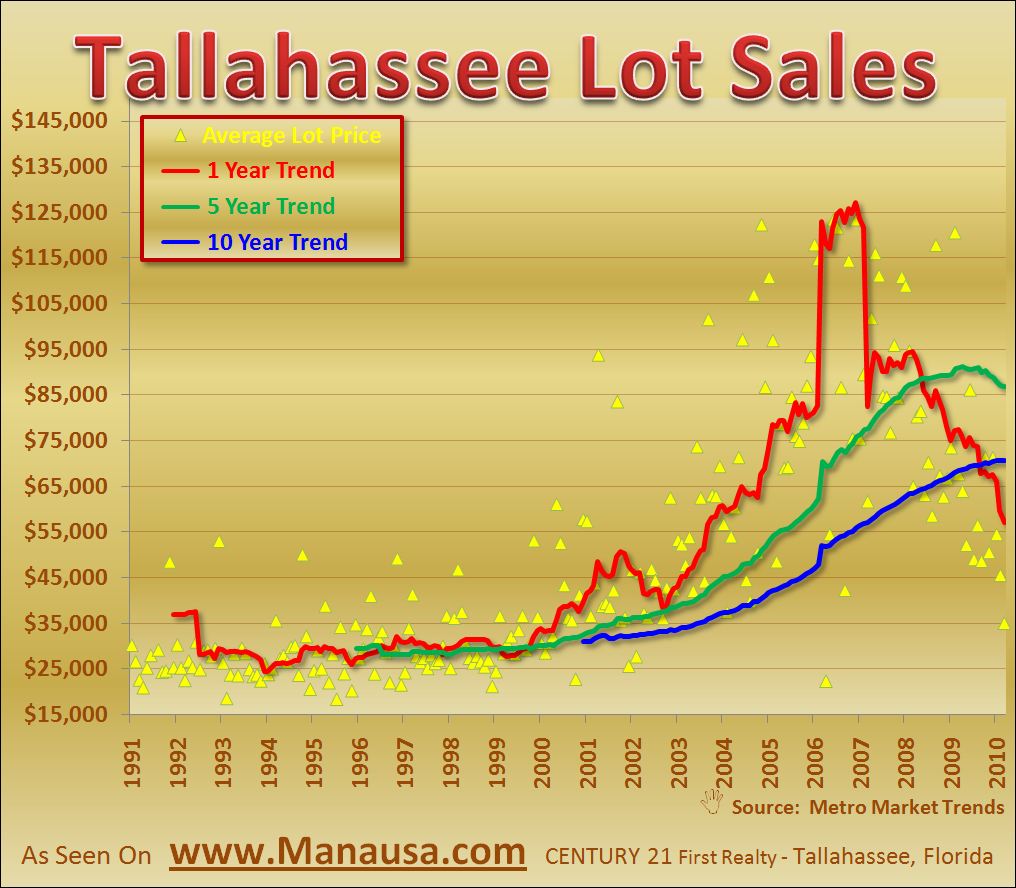 I believe it has a lot to due with the Florida Comprehensive Land Use Plan which was enacted in the 1980s. The "Comp Plan" created a glut of residential lots available and thus there was no real appreciation throughout the 1990s. By 2000, the glut was consumed and normal market conditions resumed. The cost of development had skyrocketed and now residential lots were selling for significantly more money.

All of this coincided with a national real estate market explosion, so land prices shot through the roof. More developments were created and more lots were brought to the market in order to keep pace with the frantic demand. Unfortunately, the explosion is over and we are left with another glut of residential lots for sale in Tallahassee.

In order to determine the realistic path residential lot values will take, one must study residential supply and demand in Tallahassee. With our 12.5 months of supply of homes, as well as the mounting shadow inventory, it is likely Tallahassee will not need any new homes built for growth for the next 3 to 5 years.

When we plot expected lot sales on the graph, we see the following disturbing image: 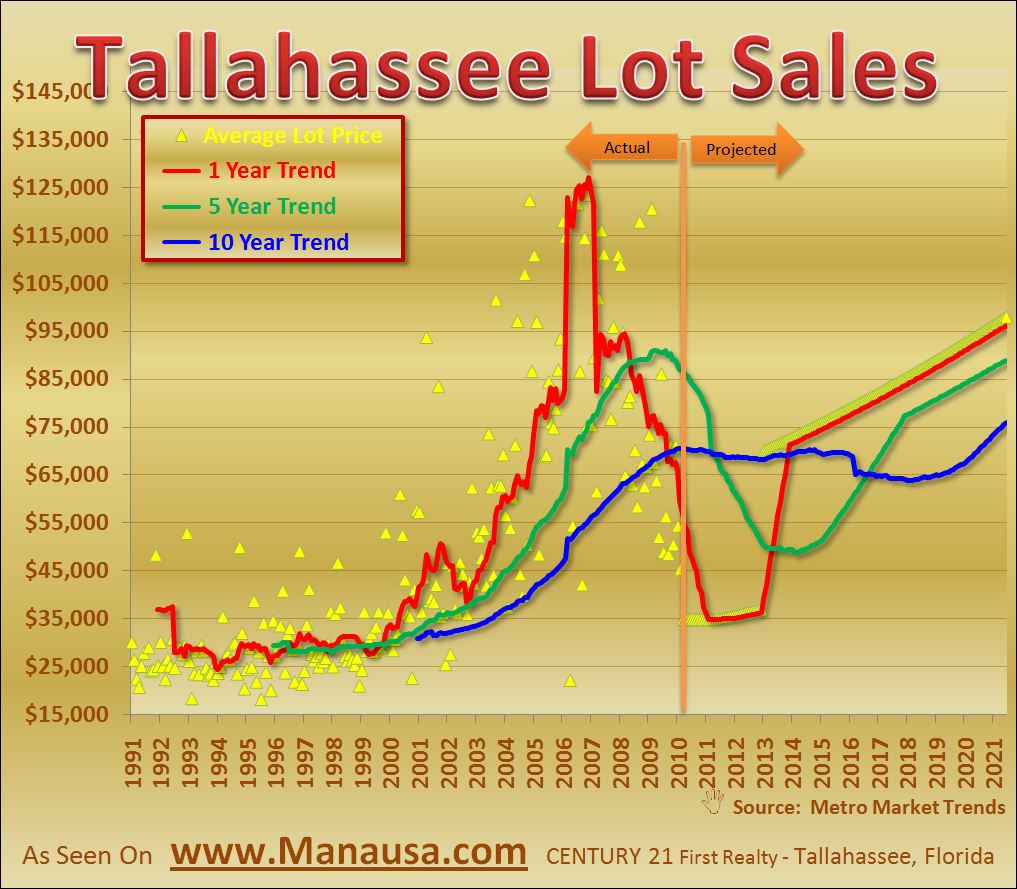 In the real estate graph above, everything to the left of the vertical orange line has occurred, while everything to the right is projected. Note how we project a period of several years where lot values hardly move at all, but once the inventory is consumed, we see values shoot up to a level that is consistent with the expected cost to bring them to market.

When we look at the specifics of Robert's situation, we know that he purchased his lot in 2007 at a price that was just below the average lot price at that time. We will assume that if sold at any time in the future, it will sell below the current average lot price. The following graph shows that we should expect Robert's lot to return to its acquisition value in 2019! 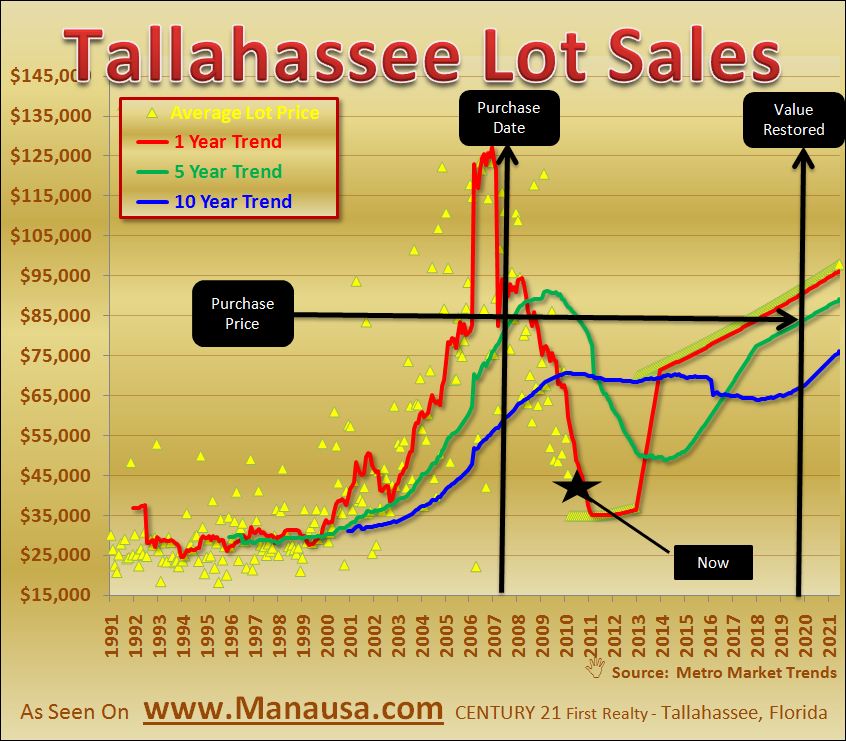 So how do you decide what to do with your residential lot in Tallahassee? In order to complete our case study, we need to make some assumptions for Robert's specific situation. For the purpose of our analysis, I will assume that:

Using these assumptions, we know that Robert is paying roughly $5,000 each year to own a lot in Tallahassee ($8,000 in payments less $3,000 in principal reduction). Simply put, it costs him a net of $5K each year. He could sell it this year (most likely) for roughly $40K. He would still owe $60K on the note so with closing costs, a sale this year would require Robert to bring a check of about $24K to sell the lot.

He would need to hold the lot until roughly 2014 to be able to sell it and bring no money to closing (but that is after investing $8K per year for the next four years).

I think the simplest way for Robert to evaluate his best course of action is to acknowledge that he has a decision to make. He should view each choice as a decision on how to invest $24K.

Were this only a financial decision, the choice is clear and he should sell. His $8,000 per year investment in this lot is not wise. But if he plans on moving here in the next couple of years, keeping the lot makes sense. Why go through the expense of selling and then buying again in just a few short years. But once we get beyond two or three years, he would be smarter to sell the lot, and then later buy one like it when he is ready to build.

The money being spent to own the lot adds up quickly, so my instinctive advice was off base. Holding the lot will most likely yield worse returns then taking his loss today and investing wisely in the future.

Joe,
Always enjoy your blogs.
It seems property developers, especially those whose still own the majority of lots, have lowered prices.
But I think size restrictions are worsening the sales rate. Buyer decisions have changed in the last couple of years. "Needs" in 2005, may not be "needs" today. After all, how many 2+2 families really "need" 2800sf or 3200sf homes?
My guess is these developers are going to have to continue to lower prices because buyers can't justify lot+build versus just buying existing homes.
Thanks for letting readers comment..
Martin

Yes Linda, it would be very similar with houses, except that you would add rental income for the home during the hold time.

Hey Martin, you are right. Buyers are much more focused on values... but developers owe money on the lots so many are not in a position to lower prices. We still have years' to work through this.