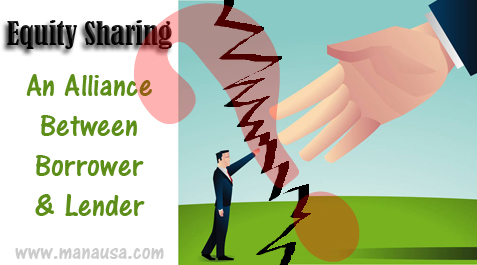 For those of you who missed my last blog post titled Equity Sharing Is A Solution To Housing Crisis, you might want to check it out before reading today's follow-up article. The blog was featured on Active Rain and we received some good reader response. Not surprisingly, several readers thought the equity sharing plan to solve the housing crisis was not very good.

Most of the comments were sound and were legitimate concerns about undertaking such an enormous task to put an end to the housing crisis. I would like to list them and provide my take on their concerns.

The reader response was varied, from neutrally pro or con, to strongly so. Michael wrote:

This is a good idea, but I don't know if banks want to go into the property owning business.

I agree that lenders will not favor this equity sharing solution compared to traditional lending, unfortunately the present situation is such that they need to try something that will allow them not to write off such large losses. If millions of foreclosures flood the market right away, they will get pennies on the dollar for their returns. If they slowly leak inventory onto the market (current strategy), then they will slow the recovery and make the mortgage industry slow for years. While not the most favorable option, it appears to be the best lender option for maximizing their returns and regaining their industry.

I don't think the banks will really be motivated by this as they are in the business of making loans, not investing in property/equity sharing.

Again, I agree with what they "want," but the fact is that they ARE in the business of investing in property. As they foreclose on homes, their inventories of REO properties are rising to an all-time high. The lender paradigm has shifted and until the housing crisis has worked its course, lenders will remain in the business of owning properties.

If it is a good idea the free market will bring it forth. This is not the first time I have seen this suggested. If the market isn't doing it by itself I do NOT welcome the heavy, clumsy hand of government tyrannically seeking to impose this.

And I agree completely with this. Lenders should not be forced into any type of equity sharing solution, they should make the best choices to maximize shareholder value at their institution.

Finally (there are many more, but I will end with the best counter argument) Charlie counters:

Or the lender can let the property be foreclosed on get 200k on a 300 k house have 3 years of payments by the ownder at 5 % which would be 52k resell the house for 180,000 make a new mortgage at 180,000 and come out way ahead in a couple of years. Which is why lenders have been so slow to modify.

Charlie my friend, this is where I completely disagree with your premise. Many of the readers who commented seem to believe that interest received on a loan is profit for a lender. This is wrong. Interest received is revenue, and this revenue is used to run all of the operations as well as serve as profit. It is not recovery of money that has been lent!

The lender should make the choice that returns the highest ROI to the lender. It is the homeowner who is in default of the agreement., but the lender must do something constructive to avoid even larger losses, thus the real question for the lender should be ...

"Will the lender get more money by foreclosing or by working out an equity sharing opportunity."

In a perfect world, they would do this on a case by case basis, but the immense number of problem properties suggests that it might be more profitable for the lender to establish a plan and offer it to any interested homeowners.

An equity sharing solution would allow the homeowners who want to keep their homes to do so, which would reduce the amount of foreclosures that are necessary. This would allow lenders to clear out REO inventories much faster and we would see a quicker end to the current housing crisis.