Equity Sharing Is A Solution To Housing Crisis 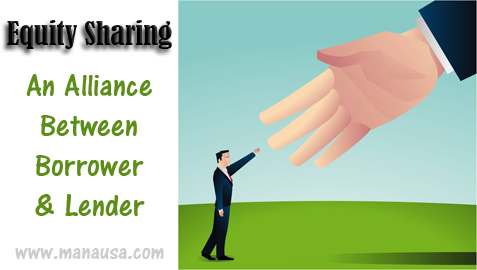 Recently, there was an OP-ED in the New York Times that proposed Equity Sharing as a solution to the housing crisis. The opinion is sound and it is an attempt to forge an alliance between lenders and their borrowers, which ultimately might be the only way to fix the housing market.

Currently, lenders are at a gross disadvantage to the conditions of the real estate market (many would argue, the market that they helped create), and they are not able to fix mortgage delinquencies in the traditional manner. Distressed properties have historically been such a small percentage of the market that lenders would foreclose, dispose of the properties, and factor in the losses as a cost of doing business.

But today, there are too many properties in distress, and lenders cannot unload all of the properties that they either have foreclosed upon or which they would have historically already foreclosed. The relationship between lender and borrower appears to be at odds. But there might be a unifying solution that is "best case" for where we now find ourselves.

In an equity sharing arrangement, homeowners and lenders would become partners in a long-term equity-sharing arrangement. This would require the lender to write down the existing loan to market value, while the homeowner would enter into an agreement where the lender would take a 50% interest in the property. Both parties would split any gain from a future sale, thus the solution is a best case "win-win" for each.

The agreement would also include a buyout provision that would allow the homeowner to "take out the lender" at any time for a pre-determined amount of money. With this additional measure, the homeowner would not feel trapped in the home and could always regain 100% ownership when the market gets stronger.

Equity Sharing Is A Solution To Our Housing Crisis

The market needs a major overhaul, and currently so many homeowners are trapped in upside down homes that they cannot sell the home they are in to facilitate a move to another. Equity sharing would provide the grease to start things moving forward again. We know that the bulk of remaining buyers are already existing homeowners, so a solution to their problem is a solution to everybody's problem.

The banks might balk at this solution, believing that this will cost them a significant amount of their asset base. But the reality is that the asset base has already been diminished, and their chances of moving forward and generating revenue again relies on a housing market recovery. Hopefully, they will be wise enough to explore this.

Thank you Brad. You mentioned the tax credit expense.... that will only start to hit now in the form of reduced revenue for the gov't... it's amazing we continue to choose to elect the kind of people who make the same mistakes over and over and over ....

The Facts: Many real estate loans that were granted to those who bought houses in the United States since 2002 are being wiped off the books, as many of these homes are being foreclosed upon, or the mortgage company is allowing the home owner to enter into a short sale, which also wipes the loan off the books. Every time a house is sold in a distressed circumstance, we are not only punishing the owner of the house, but we are also punishing the economy of the United States.

The Problem:
Homes are being sold after foreclosure or short sale far below actual market value. These homes are flooding the market, which has been driving down market value of surrounding properties for the past five years.

Current owners must meet the following criteria to be eligible:
Must be their primary residence
Must have purchased the property after 2002
Must not have refinanced for a higher amount of their original mortgage
Must have had a hardship such as loss of income, illness, spouse deceased, etc.
Must be able to qualify under current mortgage company guidelines

Mortgage companies would be receiving the same amount in monthly payments from the current owner as they would from a new buyer – what’s the difference who makes the payments? The property is going to be sold for a reduced price anyway, so why not “sell” it to the current owner if they can afford the new payments based on current value. Furthermore, the original loan granted to the home owner is going to be taken off the mortgage company’s books anyway, so why not let the original home owner keep their house thorough this type of “home loan modification”?

The property would continue to be maintained, instead of deteriorating, which brings down the value of neighborhood homes. Mortgage companies will receive the exact same mortgage payments that they would receive if they sold the home to another person. Owners of real estate would keep their homes for a minimum of five more years.

I have been doing equity sharing for 6 years now and for the past two years have been working to get banks on board with the equity share concept. Ocwen Servicing company is already doing it in full force. I have a minor twist with my formula though. I put the property in a living trust with the homeowner and bank acting as co-beneficiaries of the trust.

This is the closest thing to a joint venture that can be used while keeping the title safe and the "partners" performing according to the trust agreement. The title is "held in escrow". All of this has to be done the right way or it could be considered a "disguised sale" by the IRS and could turn into a tax nightmare.

With tightened lending standards, more people with banged up credit, not much down payment money available and REO's and vacancies galore, it makes perfect sense that the timing is right for the underutilized but much needed "third housing sector", the equity share.