Take A Lesson On Real Estate Statistics From Homer Simpson

When it comes to understanding real estate statistics, who better to turn to than Homer Simpson?

In an exclusive interview with Kent Brockman, Homer was quick to demonstrate that you can use statistics to prove any point you are trying to make, even if your interpretation is not valid.

I bring this up because recently a first-time reader wrote me to argue this point based upon her singular reading of one of my blog posts.

But long-time readers could tell her that we don't take a singular view of the market. 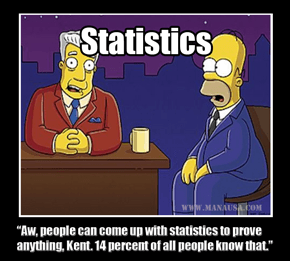 So the reader viewed a recent article which addressed the rising tide of homes that failed to sell in Tallahassee and chided that I was faulty in my conclusion. Basically, she felt there was more going on than what you could glean from one singular graph.

Of course, I wrote her and let her know that she was correct, that my conclusion was based upon more than the real estate graph in the blog post, it was based upon the hundreds of different charts and graphs that I maintain of the Tallahassee real estate market.

How Do We Explain This Crazy New Trend?

So today, I will share a perplexing trend occurring in the Tallahassee real estate market. I have written about it in the recent past, but I am still not convinced anybody has provided a fair opinion on why it is happening (including me). 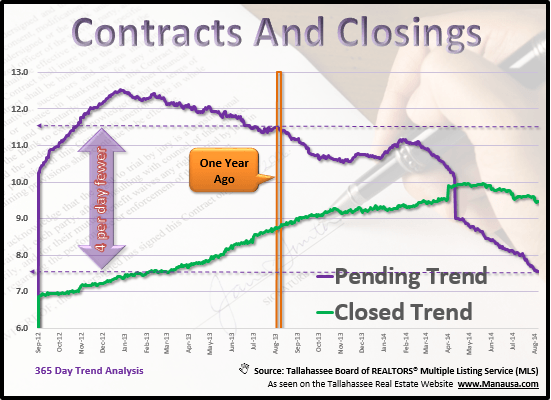 Each line shows the average over the past year, with the purple line measuring new contracts on homes in the Tallahassee MLS, while the green line shows new closings in the MLS. We would expect there to be more contracts than closings at all times, because a fair amount of contracts never make it to closing, while all closings require a contract. Right?

The purple line shows that the number of contracts being recorded each day in the MLS is falling fast. Were this the only real estate statistic that I maintained, I would conclude that fewer buyers were purchasing homes.

But the green line clearly shows that we are closing more homes each day in Tallahassee than we were a year ago, all the while were are writing 4 fewer contracts each day. How does that happen?

I have assembled some of my thoughts on what is occurring, but the green line in the graph above does clearly show that the number of homebuyers in the market is declining. But they are declining at a far slower rate than the new contracts (purple line) would have us believe.

All of the reasons listed above certainly contribute to the declining trend of new contracts in the MLS, but they do not fully cover the 60+% reduction that is occurring. The current pace at which contracts are being written would yield the worst year of home sales that I have recorded in more than 20 years, yet our closings are still higher than the past few years.

Consider this a "shout out" to all my mathematically inclined readers, plus those with real estate experience, to give us some additional thoughts on what could be occurring. You can leave a comment below, or you can use the Google Plus social application to let us know. I'd love to hear more thoughts on this disturbing trend, even if it's from Homer J. Simpson himself.