There are a lot of people tracking foreclosures in Tallahassee, as the fate of the Tallahassee real estate market appears to be in the hands of the largest banks.

People who are trying to sell a home are finding the market is full of distressed properties for sale, and they are not going away anytime soon.

In fact, if you saw the report on foreclosures in Tallahassee yesterday, then you know their numbers are on the rise.

It makes me wonder, who are the banks that control most of the foreclosures in Tallahassee?

Who Controls The Foreclosures In Tallahassee

In order to find out, I research the banks that had filed lis pendens in 2012. These "soon to be" foreclosures in Tallahassee are coming from over 600 different lenders, but merely five lenders hold the cards for roughly half the filings. 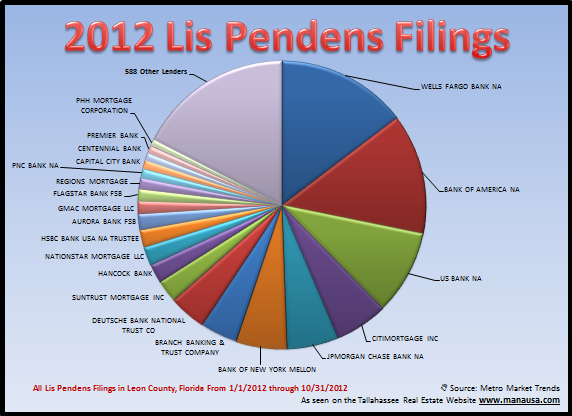 In the real estate graph above, the market is segmented by the different lenders who have filed a lis pendens in 2012. When we look to see who holds what percentage of these distressed loans, the following table is produced:

The foreclosures in Tallahassee appear to be in the hands of the largest lenders, and that means we could see several different potential markets in 2013.

If the five biggest lenders move rapidly and release properties fast, we could see thousands of foreclosures in the Tallahassee MLS in the first quarter.

This would mean the people who are not in distress (and want to sell a home) would likely have to take back-seat to the 5,000+ properties that have yet to be sold to new owners.

On the other hand, if these five lenders release the properties slowly into the market in an attempt to sustain property values, then we could see the recovery push well beyond 2020 as these lenders serve to supply the market with homes only as fast as demand returns.

With either solution or anything in between, foreclosures in Tallahassee are here for the foreseeable future.

If you want to know how the upcoming foreclosures in Tallahassee will impact you and your need to move in the near future, just drop me a note and we can discuss your specific situation and all of your courses of action.