With roughly 250 homes, the Villages at Maclay has single family homes and townhouses that fit a wide variety of lifestyles.

You can find this popular NE Tallahassee community just south of Maclay Road, west of the Village Commons Shopping Center (roughly a half mile north of the I-10/Thomasville Road intersection). Home construction and sales began in 1997 and currently can be acquired for prices ranging between $150,000 to $250,000.

In this report, we will look at long term average home price trends, value trends, and size trends of homes sold in the Villages At Maclay, as well as all current listings in the Tallahassee MLS and all closed home sales going back to 1997.

It is important to note that the narrative contained below is for sales through December for all previous years, but through the fourth week of July in 2015. The graphs and the closed sales table will be continuously updated into the future (meaning bookmark this page if you always want to know the current status of homes in the Villages At Maclay).

Average home prices fell slightly in 2014, but have recovered all of last year's decline. The average home price in the Villages At Maclay have been very stable for the past four years, ranging between $181K and $185K, and currently is at $184,300.

Home sales activity this year appears to be consistent with what we have seen over the past seven years, but still below the levels recorded during the most active years when the neighborhood was developed (or again at the peak of the housing market from 2003 through 2007). This likely means that pent-up supply is building. Thus far in 2015, there have been 10 closed home sales in the Villages At Maclay.

Average home values in the Villages At Maclay rose 4% last year, but have dipped somewhat so far in 2015. Similar to what we explained about prices, values have been fairly stable since 2012, ranging from $120 to $125 per square foot during that time.

Through the fourth week of July, the average value of a home sold in the Villages At Maclay has been $123 per square foot.

The average home size sold in the Villages At Maclay typically falls in a range of 1,400 to 1,550 square feet, and this year home size averages are near the middle of this range. The 10 sales thus far in 2015 have averaged 1,474 square feet.

The following map and list of homes are the most recent listings in Villages At Maclay. If no homes are shown, that means that none are currently listed for sale in the Tallahassee MLS (or the ones that are have contracts on the them already). This list is updated every 15 minutes, so you can be assured that this page will always bring you the most up-to-date listings and sales that can be found for Villages At Maclay (bookmark this page if this is an area that you want to track).

The following list shows home sales going back to 1997 in the Villages At Maclay.

I hope you enjoyed our July 2015 update on home sales in the Villages At Maclay, please feel free to drop me a note if you have questions not covered in this report. 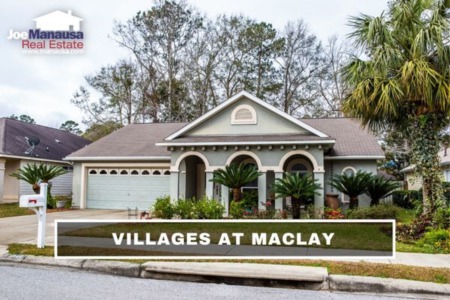 The Villages At Maclay is a popular NE Tallahassee subdivision with roughly 250 single-family detached and attached ... 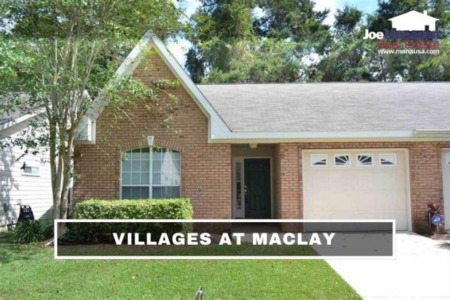 Villages At Maclay Listings And Home Sales May 2022

The Villages At Maclay is a small but uber-popular Northeast Tallahassee neighborhood located on the west side of ...