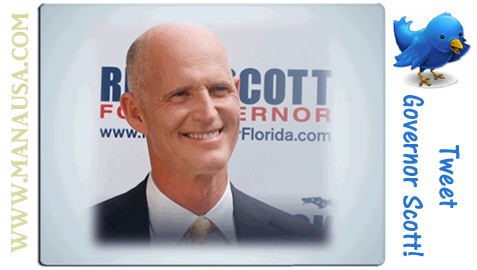 I am going to Twitter Florida Governor Scott tonight at 7:00 p.m., and I encourage all Tallahassee Twitterers to do the same. In an attempt to quell complaints about accessibility, Scott is going to hold a "Twitter Town Hall Meeting" to answer questions from as many people as he can. For those not familiar with Twitter, it is a micro-blogging social media service that often times breaks news story before the conventional media has time to assemble a story for mass production.

"Join me for a Twitter Town Hall tomorrow night at 7pm. Send Q's to @FLGovScott, use #flgov. I will answer as many Q's as I can," was the Tweet sent out Wednesday evening from the @FLGovScott account on Twitter.

If you have a twitter account, please join me in asking a big question (maybe raising awareness) about his plans, if any, to use higher education in Florida as the impetus to economic recovery in the State of Florida. If enough readers will do this, surely Governor Scott will answer our question. Please forward this article to your friends, and then just cut and paste (exactly) the following into your twitter account and then "tweet":

@FLGovScott Governor Scott, do you plan on fixing higher education as a way to stimulate the FL economy? http://bit.ly/e2be9A #flgov

I wrote an article about Twitter and real estate a few years ago, and in it I enumerated the many benefits of using Twitter as a real estate broker who actively markets on the internet. At the time, I had a few thousand people who followed my tweets about housing reports. Since that time, my account has grown to 145,000 followers and growing daily!

My traffic from Twitter has skyrocketed. I have learned so much about Twitter and how to use it in my business. I found a great Twitter followers tool that you can demo for free called Tweet Adder, and you can download it here. I wrote an updated article on using Twitter for Business at the Internet Squeeze website, and it covers the 3 Keys to using Twitter for business.

There is more to Twitter than meets the eye as I have learned. @HousingReporter on Twitter is the most followed active real estate broker on Twitter and I can tell you I get hundreds of Twitter followers to the Tallahassee Real Estate Blog every week. Take the time to use this powerful tool and as the Governor would say, "Let's get to work!"