The national homeownership rate has hit a nineteen year low, and I am worried that our elected officials are going to misread what this means and therefore try to solve a problem that their predecessors created.

They say that the road to hell is paved with good intentions, and it might be utopian notions rather than the needs of our Country that is guiding our "leadership," but it is time for the capital markets to get healthy, and that means Washington needs to play a lesser role.

While it is true that the percentage of people in the US who own homes today is lower than it has been since Bill Clinton took office, the fact is it has only recovered to an "above average" level when compared to its historic rate. The homeownership rate is still too high.

The home ownership rate in the United States is trying to "return to normal," as it is still above the level recorded from the 1960s through the 1980s.

The graph below was created with data supplied by United States Census Bureau, and it clearly shows that the current 19 year low represented a thirty year high when it was last seen in 1995. 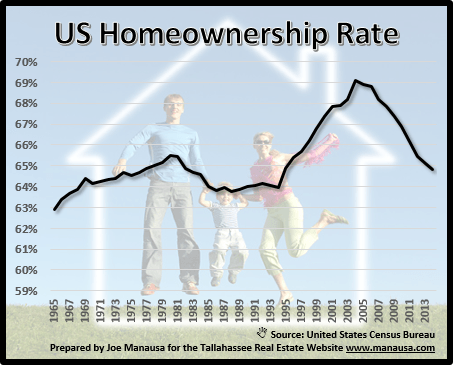 When the guy in charge of HUD gets it wrong, you have to fear that we will soon be making the same mistakes that created the housing market explosion a decade ago. According to the Secretary of HUD:

Homeownership is one of the most important paths to the middle class for families. It's how folks put down roots, build wealth put kids through college, start businesses ... If there are people who are ready to buy a home, but who aren't getting access to credit, then we've got a problem, and that is what we are facing right now. - Shaun Donovan, Secretary of Housing and Urban Development

Yes Shaun, we do have a problem.

But let us not treat the symptoms, let us focus instead on the disease.

The symptoms are low credit scores and lowered access to credit. The disease is a credit market that wants to treat all borrowers the same, regardless of their history of repaying debt.

The primary reason that a third of our citizens cannot get access to credit is because of the government's intrusion into the capital markets.

This is how the capital markets covered their risk.

But the government has changed that over the past twenty years. They want everybody to get access to the lowest rates, whether they repay the loans (as agreed, or not even at all). Now, people either get a crazy low rate, or they are denied credit.

The government's heavy hand in the capital market has frozen credit for people with decent credit histories, but the risk is too high and the return is too low for investors to want to get back into the mortgage market. So where are they going?

The housing crash created a new market for large institutional investors. In the past, the marginal cost of acquisition was too high for big money to get into small housing, but things have changed.

Wall Street has bought it's piece of Main Street. The opportunity to buy pools of loans has created an affordable mechanism for institutional investors to move into the single family housing market. And this is a major development.

The housing industry has always been a largely decentralized market, making it tough for even the wealthiest players to manipulate costs in the market. But this is going to change.

If fewer entities own and control available housing, it is likely that we will see less competition for rents and therefore rising rental rates for the growing "renters" segment of the housing market. The price of homes will likely reach a new level of stability, and prices could likely soar. Why?

Because families need to move at times, but investors can stay the course. So if there is a large percentage of homeownership, the urgency of families needing to move creates pricing opportunities for buyers. But if homeownership moves to large investors, there will be less distressed moves and therefore more stability in pricing.

Ultimately, the intrusion of institutional investors into the single family homes market could very well lead to higher home prices and higher rental rates in the future.

The confluence of three factors make now a very attractive time to acquire single family real estate as an investment.

First of all, most existing homes for sale in Tallahassee are still trading at levels below what it would cost to rebuild. This means that as Tallahassee grows (and needs more houses), the higher cost of construction is going to pull values up.

Secondly, mortgage interest rates are still very low. This means that the prudent buyer can safely leverage his investment in order to increase his yield (Return on Investment) far beyond what can be gained in most other safe investment opportunities.

Finally, supply levels in Tallahassee still favor the buyer, so there are still plenty of premium investment opportunities for buyers.

If you think you might want to take advantage of the opportunities created by a declining homeownership rate, just drop me a note and we can schedule a time to review your opportunities and desired objectives.