We started measuring the failure rates for homes on the market five years ago in order to identify the common elements of all successful home selling plans.

There is a lot of hype and a lot of hot air put out by real estate agents, but tracking the failure rates for properties on the market was a real eye opener.

Another by-product of this daily measurement is that we were able to develop a gauge for home sellers that reflected the relative difficulty in selling a home, and this gauge has been sending a very strong message lately about the changing trend for home sellers.

When we measure all of the homes "leaving" the market, we can determine a relative success rate over time. Of course, "leaving the market" means that a home sold or its status was changed to "canceled," "expired," or "withdrawn." 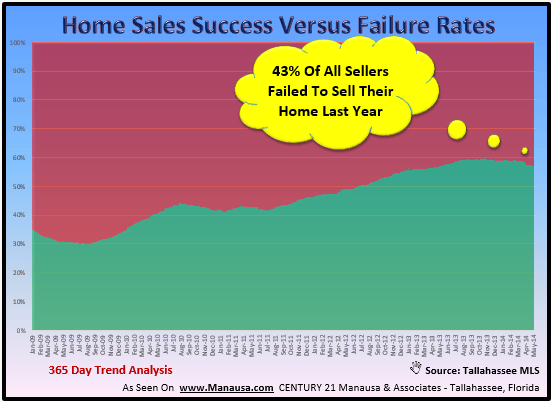 The market had been improving since early 2009, when there was only a 30% success rate for home sellers. Can you imagine only having a 30% chance of selling your home?

All last year the market had been at a peak that hovered around 58%, which means that even at the best of times, less than 6 of every 10 homes listed for sale in the Tallahassee MLS were using a successful home selling plan.

But 2014 has shown a reversal in fortune for home sellers. The home sales success rate is on the decline for the first time since 2009, and it means home sellers should expect tougher competition and thus will require a better effort from their real estate company.

If you would like to know the critical elements contained in the most successful home selling plans, just drop me a note and we can schedule a time to help you see how we ensure you join the green group above.