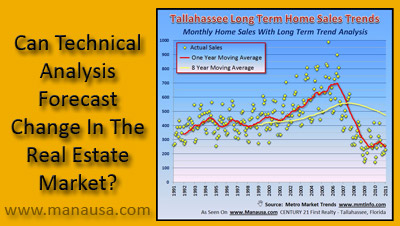 Can real estate charts help forecast the future of the Tallahassee housing market?

Is it really possible to anticipate the future by observing how short term trends are interacting with long term trends?

I ponder these questions after receiving an email from long-time reader "Bob" who likes to use charts to track trends in the stock market.

Before we jump into what is nearly a guest-authored-post, let's look at "what the heck he's talking about."

Bob likes to utilize technical analysis when examines the stock market. In a nutshell, this means that rather than focus on the fundamentals of a company or a sector, he looks more at the trading cycles and the current and past trends of a specific security in order to anticipate its next logical move. You can read a little more about technical analysis at Wikipedia.

Today we will look at a real estate charts featuring the Tallahassee housing market, and I promise your head will not explode if you continue reading. It might be a bit more "mathy" than we normally write, but I think it is a very interesting analysis of our market.

The following graph shows the kind of information that Bob likes to observe in real estate charts. It shows the number of closed home sales each month in Tallahassee, and then plots the one-year, five-year, and ten-year moving average of home sales in order to identify trends. 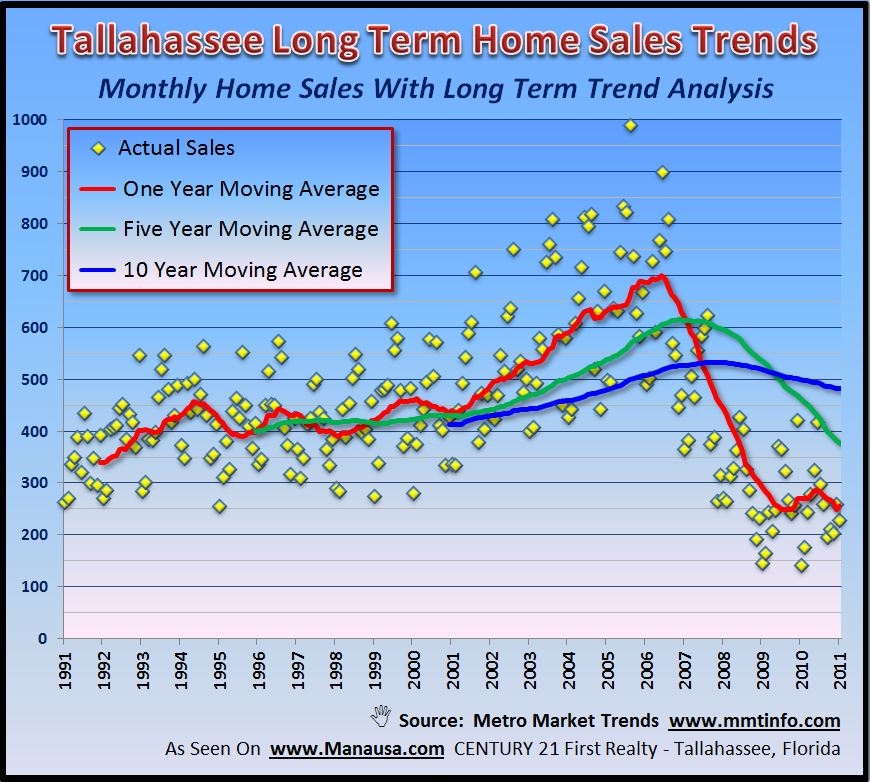 So I sent Bob this chart and here's what he had to say:

Hmmm…the “chartist” in me still thinks its going to bounce to the upside.  I think this because at the market’s peak, the 1-year average got about 100 units higher than the 5 year average.  Usually (at least in stock charts), that’s an indication that there shouldn’t be more than 100 units separation on the downside also.  Usually, a short term moving average can only get so far away from a longer term moving average.  Same thing is somewhat true of the 10-year average (i.e., a 175 to 200 unit separation).  And since the shorter term averages can only “pull” the longer term so much, a bounce seems immanent.  And lastly, the 1 year average sales already bounced at 250 units, which doesn’t necessarily imply that a bottom was reached, but in the context of the above, it seems more likely.  I guess time will tell.

For what it's worth, early in the graph, the 1 year average zig-zags through the 5 year, but is above the 10 year.  I think if you plotted something in between, like a 7 or 8-year average, you’d see that the 1-year tends to bounce along the 7-year (or 8 year), constantly using it as a floor or ceiling.  So if we did get a reversal, the 1-year average would bounce back to the 7-year line, which will probably be around 425 units if it happens soon.

Yeah…I know charting sounds crazy…but some of it does work…especially the interplay of moving averages. - Bob

Well, I was certainly intrigued. I tweaked the moving averages and found that the 8 year trend was the best fit for Bob's analysis. 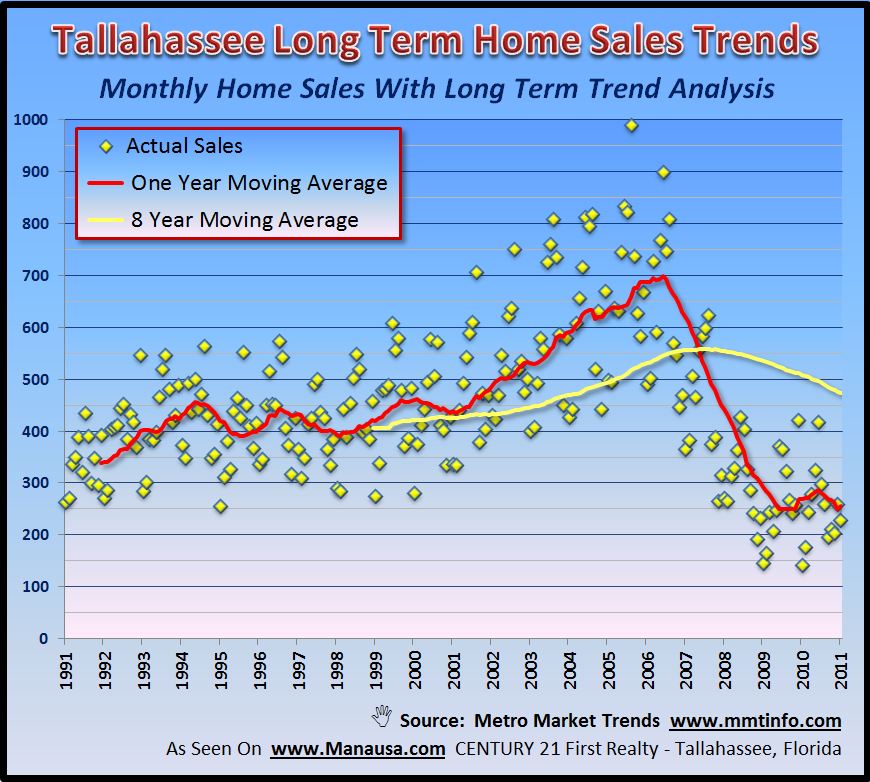 So, enough about Bob, where do you think this market is heading? Post a comment below [on the blog site for our email viewers] and let us know your prediction and why you think differently (or the same) as what our real estate charts are forecasting.

The only thing worth considering is that as our 1-year rises, the 8 year will be falling. So you have to guess a little about where they will meet. I think they’ll meet around 400 units. This assumes that things start picking up almost immediately.

But if the 1 year continues to stay fairly level before it begins to seek the 8 year, then their intersection would be lower still. It does look like the fall of the 1 year has been arrested for a good long time based on the fact that it got really far away from the 8 year and now they are coming together again. If sales do fall again, it probably won’t do so until these lines meet, which should take a long time. In human terms, it means that people who bought their houses in the last 8 years are starting to flat refuse to sell any cheaper. Based on all this, it’s a reasonable statement that housing sales shouldn’t drop any more for quite a while and could bounce soon. But we intuitively knew that already. :) There is some comfort there.

Yeah, I didn't account for the dropping of the 8 year trend falling, but the duration of time our sales stay low will dictate where they meet. I suspect it will be higher than the 400 market (I'll bet you a beer ...).

I'm hoping the folks who "flat out refuse" can hang on during the duration of the recovery. We have to clear out the short sales and foreclosures, so this will be a protracted period of time.

Hey, I like this kind of analysis. Perhaps you could follow up with the difference between the spring of 2011 and the current situation and see if you are tracking with the predictions made then. That would be a good scientific approach, and you can revise your model based on repeated looks. Good luck--I may try something similar with my neighborhood.