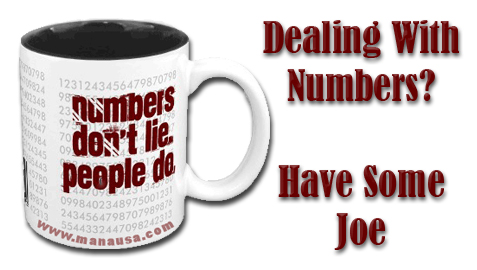 We had a lot of feedback on yesterday's blog (Did You Hear What They Say Is Next?) which was a commentary about the garbage being spewed by the NAR and how it is having a negative impact on the credibility of the real estate professionals who perform a valued service by reporting on local real estate market conditions. Basically, it was a rant about putting an end to the "now is the time to buy" style of yapping that our industry lobby has eschewed every year, regardless of market conditions, regardless of individual needs.

Ironically (or predictably), NAR issued a positive report on unit sales (reinforcing that now is the time to buy) while Case-Shiller reported home values dropping in their report of the largest metropolitan areas. Simultaneously, I received a spam email from a real estate franchise (which will go unnamed) bragging about its wonderful achievements last year. Since I am currently not so thrilled with my franchise, I actually read the message.

The major cry of the NRA is "guns don't kill, people do." Well, I'm going to borrow their slogan, reshape it, and use it for my theme today. Numbers don't lie, people do!

... reported today at its national convention that it ended 2010 with 79,315 associates, 701 market centers (offices), and associate profit share up 7.2 percent, with its agents receiving $34.6 million dollars back. Since the inception of the profit sharing program, the company has given back over $304 million in earnings to its agents. Additionally, CEO Mark Willis shared in his annual State of the Company address to more than 8,000 convention attendees that, since the real estate market’s sharp downturn in 2005, the company has grown 30 percent in agents, 40 percent in market centers, 21 percent in closed units and 11 percent in closed GCI.

Sounds exciting doesn't it. It's kind of like a NAR report. Now is the time to buy with this real estate company...

What Their Numbers Say To Me

I took their reported numbers to be true (meaning I did absolutely nothing to confirm or refute their claims on performance). Just taking them at face value, these numbers report an improving situation for the franchise, but a worsening situation for their offices, agents and customers. Here is why:

They saw an increase in agents by 30%, but closed units (number of homes sold) only grew 21%. This means average agent production declined 7%. Worse yet, revenue per agent dropped 15% (imagine if your salary was cut 15%) and revenue per office dropped 21% (meaning the owners of the local office saw their top lines decrease by 21% so their bottom line most likely fell significantly or went into the negative).

We should find it shocking that this organization had the chutzpah to rub this in the face of their associates and owners, all the while serving them more Koolaid of prosperity at their convention. Taking the spin off of the numbers (remember, numbers don't like, people do) and putting them into a graph reveals the real performance changes per person and per office: 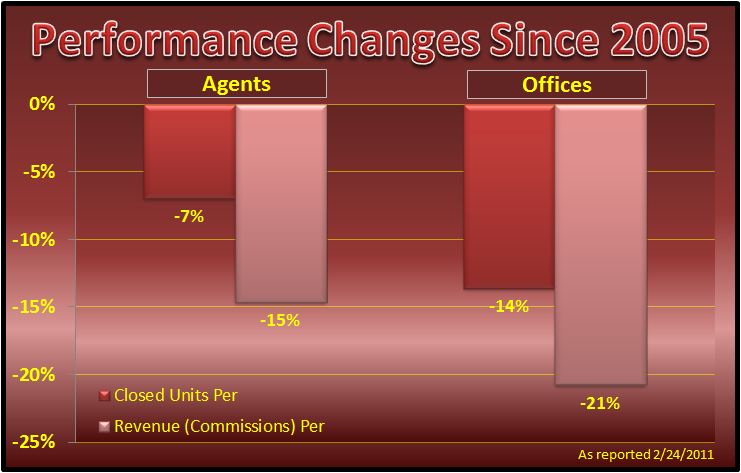 What These Numbers Mean To Home Sellers

Their business model is purely built around independent contractors, so basically if you have to sell a home, and you chose to work with this company, then think about what this report is really saying. This company is seeing performance fall "per person." Imagine if your home is listed with them and the one, solid buyer for your home calls into the company. With over 113 agents per company who perform below industry average , what are the odds that the buyer is successfully routed to your chosen listing agent? I would find this out before I listed with them.

I believe that prudent home sellers (who understand that roughly 60% of hopeful home sellers failed to sell their home last year) will do the research to study the office (as well as the agent) before they decide to list their homes. This has not been done very well in the past.

I find it unfortunate for the people involved when we see this style of reporting. And I am not picking on this one franchise, we see this type of thing from many of them. That is why it is important to know with whom you are dealing, whether as a home seller hiring a real estate company, a business owner choosing a franchise, or as an agent choosing a broker. Don't let somebody feed you garbage and tell you it's sugar. Remember, numbers don't lie, but people do!

Finally a voice of reason. :)
Many agents don't realize that if they became true experts within real estate, they would gain a lot more clients. Tell it how it is, you may not close a sale but you will have gained credibility.
The NAR, along with Lawrence Yun, is a joke.

Thanks John... hmmm, the voice of reason. You are so right about Yun.