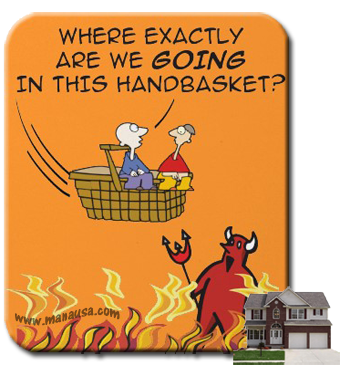 There was an article in yesterday's New York Times that explained the new mortgage relief plan, which is due to be signed today, is very close to completion.

Like so many articles that have been written about the housing market crisis, this one liberally showed how all the victims will receive assistance.

In case you do not remember, the victims of this are the homeowners who have or will lose their homes to foreclosure due to their failure to make the payments on the loan.

They are victims because the banks wrongfully forged documents to make the foreclosures happen.

Now I certainly understand why the Feds want to go after and punish the banks for forgery, but I'm having a problem labeling the homeowners as "victims" of this crime.

Have their been any cases reported where banks forged documents to foreclose on anybody who was "current" on their loan?

Everybody is lining up to take shots at these banks as if they were attacking performing loans. These are loans that are in default!

You are not going to fix the housing market by handing out money to people who are not making their mortgage payments. But apparently, the Obama Administration sees otherwise:

“This will be one of the most significant steps in the recovery of homeowners, neighborhoods and the broader housing market from the worst collapse since the Depression.” - Shaun Donovan, the Secretary of Housing and Urban Development

This makes me sick.

Let's not confuse two very separate issues that are really at play here.

Maybe I'm reading this wrong, but I have yet to hear stories from the "robo-signing" scandal where people were wrongfully foreclosed upon.

These lenders (or their legal representatives) created documents to show they owned the loans (meaning so they could have the legal right to foreclose). Again, have the FBI throw the wrong-doers into jail for loan fraud.

But why take money from the shareholders of these banks and give it to people who were in default of their loans? Is this really justice for anybody, or just a re-distribution of wealth?

Unless I completely missed the boat on this, I would think that this mortgage relief plan is as fraudulent as the methods the banks used to foreclose on the loans in question.

The comment from the Secretary of Hud is an insult to the intelligence of the American people. The US mortgage market exposure far exceeds a trillion dollars, giving handouts of $18B to $25B to a small fraction of the market is not going to have an impact.

Think I'm wrong? I said the same thing about the Homebuyer Tax Credit when it was first envisioned several years ago. The Tallahassee housing market (as well as the US housing market) has since returned to pre-tax credit levels, and the US government is going to receive less revenues from taxes for the coming few years.

Keep the government out of the housing market recovery. The mortgage relief plan is a terrible mistake that is a clear re-distribution of wealth (which I guess is Obama delivering on his campaign promises).

Joe - I love your website, but I have to disagree with you on this one. The banks led the charge to trick people into loans they should never have been in and pay prices they should have never paid for houses. This included fraud in issuing the loans (liar loans and the like) and fraud in packaging and re-selling the loans (further lowering interest rates and increasing demand for bad loans). This created the housing bubble that sucked in several ordinary Americans and ultimately busted the whole economy with several underwater homeowners struggling to tread water. So yes, the fraud the bankers perpetrated hurt those who got foreclosed upon and many more. Then, there were several cases of fraud in encouraging and then denying mortgage modifications. The robo-signing debacle was only the last in a series of fraudulent activties that the bankers partcipated in. Also check sites like ml-implode and mandelman for several cases of wrongful foreclosures on people that were current and people who were told to stop paying their mortgages so that they could refinance. Banks are getting off easy only paying $25 billion, and I do hope there are eventually criminal prosecutions too.

Hey TLH, welcome back and thanks for adding your thoughts.

My biggest disagreement with you is this...

If borrowers were 8 year children, I would agree. But borrowers were adults who wanted loans and gladly bought houses they couldn't afford. They have been let off the hook.

Were the banks guilty of stupidity ... yes.

Did the banks support fraud ... yes.

Put the jerks in jail who orchestrated robo-signing fraud.

The mortgage relief signed on Thursday will primarily throw money at people who did not stay current with their mortgage payments.

You think you are punishing the banks? Most of that $25B will come from you and I, from money the government gave to the banks.

We won't fix anything by giving money to borrowers who failed to make payments. And I abhor the "I'm a victim" mentality that many people are happy to use to extort money from others. It has to stop or we will go broke giving ourself free handouts.

You also need to know the *reasons* people "fall behind". There are many cases where mortgage servicers are playing all sorts of games. Things like: "forgetting" to add all the taxes into your escrow payment so that you keep paying what your statement tells you to pay, then the taxes come due. You make your payment thinking all is fine but instead of it going towards interest and principal, they pay your full taxes. Boom, you're behind. And if they "forget" to tell you for two months, you can legally be foreclosed.

The other is "force placed insurance". My sister is fighting this one. If you have your own insurance then they keep "losing" the proof; if you have escrow pay your insurance, they "forget" to pay it on time and it gets canceled. They then sign you up for new insurance (either a subsidiary company, or one that gives them kickbacks) that costs 5x your original policy (because now you are "a risk"). But the "forget" to put the new costs into the escrow payment amount. So, you pay your standard payment, they apply it to the insurance instead of the loan. Do that two months—BOOM, foreclosure.

These s have been doing this for years.