We have been anxiously awaiting the November Foreclosure Report (as we have for the most recent months since the supposed end of the “robo-signing” scandal earlier this year) knowing that the new lis pendens reports will all but forecast the supply side of the 2012 housing market.

We suspected that the reason foreclosure activity had been falling for the past year was due to the many halts the courts had caused when the scandal broke. We warned that it was likely we would see a future rise occur, and this month might be providing the evidence that we feared would come.

Tallahassee Lis Pendens On The Rise

In the graph below, new lis pendens filings are shown in red each month, while the purple line measures the one-year trend of filings. As you can tell, the past two months have revealed a change in the downward trend. Tallahassee lis pendens filings are now on the rise and we have to wonder how much "catch-up" is needed by the banks to recover lost time and money due to the robo-signing scandal. 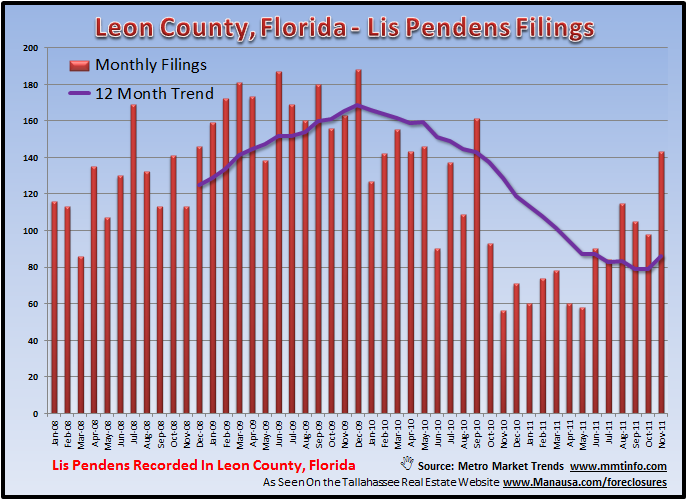 Different areas of Tallahassee are going to feel the impact of foreclosure sales (and short sales and pre-foreclosure sales) in varying levels of intensity. For example, if you have to sell a home in the 32303 zip code, you can expect that many homes with which you will be competing for a buyer will be in distress. 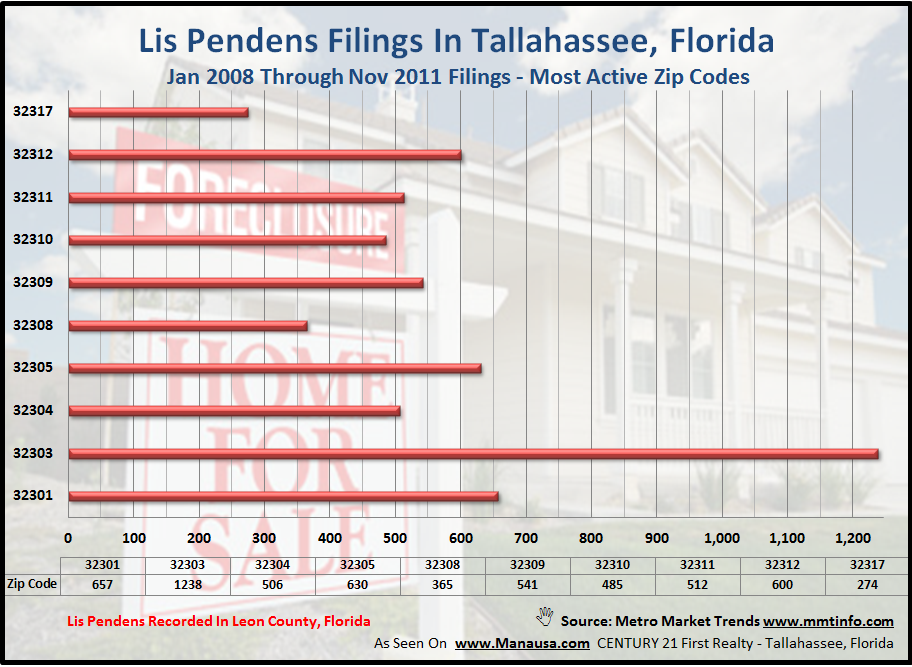 Year over Year lis pendens filings have risen in 3 out of the past 4 months, but foreclosure sales increased in November for the first time since nearly a year ago in December (the first impact of the robo-signing scandal). This could be the beginning of many months of “pent up” foreclosure starts, so we must continue to sit on pins and needles awaiting future results.

The Tallahassee real estate market is already comprised of roughly 38% distressed properties, and new lis pendens could be a signal that the next few years will have plenty more distressed properties to deal with. If you are looking for direction in what you should do or want to know how to get out of your present housing situation, just drop me a note and we can schedule a time to discuss your options and opportunities.

Hi Joe - Any reason why filings in 32308 are so high? Is it simply a larger zip code or is something amiss over there? It's a little surprising because NE always shows up as having the tightest (relative) invenetory in the monthly market reports.

Also, do you have any data on defaults in Tallahassee? The LPS Monthly Mortgage report shows first time defaulters declining rapidly nationwide. I wonder if the same is true in Tally.

Thanks for all your help.

Great questions TLH Landlord. Yes, the 32308 zip is larger, so relatively, it's beating the market. Remember though, "best" relative supply at 9+ months inventory is still too much = prices falling. Best won't save you from "not good enough."

Defaults are around 9% of all outstanding loans (30 days or worse). I included a graph from the NY Fed a while back showing our default level, and it is way higher than our traditional norm. National figures are always suspect ... examine the source. Remember, NAR just admitted to over-stating sales, it could happen with mortgage default info too.