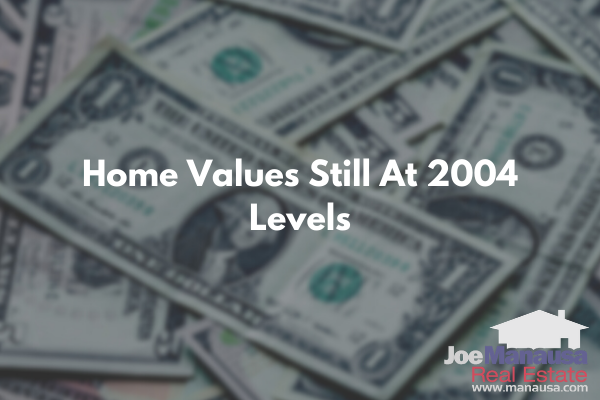 If you bought a house in 2011 and wanted to sell it today, it's likely worth about the same as when you purchased it.

Home values in Tallahassee have returned to levels last seen in 2011 and 2004, and right now the trend is heading downward.

Our in-depth review of all homes sold in Tallahassee and recorded in Leon County has produced a clear image of current market conditions, and the results might be surprising to many wanna-be home sellers.

The following real estate graph shows average home values for homes sold and recorded in Leon County (red bars). The blue line shows the one-year average of these values, and it is currently trending downward. The yellow line shows where values would be today if there were no market cycles and the appreciation rate from the 1990s had continued to present time. 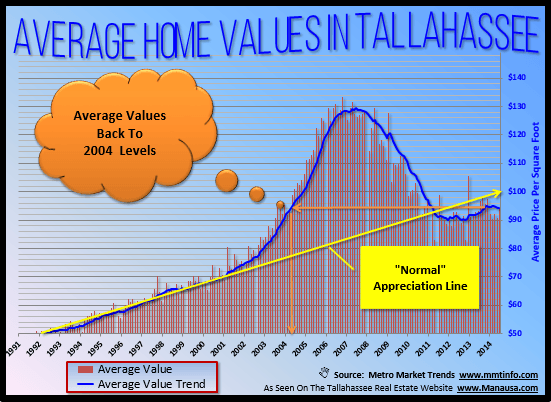 It is important to note that these values are not from the Tallahassee MLS, rather they are from the Leon County Property Appraiser. It is a far more complete list of home sales that what we get from the MLS.

Just as we found in our review of home sales in the Tallahassee MLS, the number of recorded home sales in Leon County are showing a modest gain. 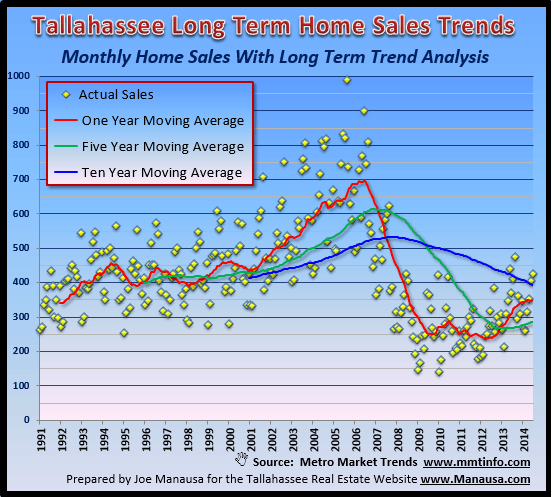 In the real estate chart above, the number of homes sold each month is shown as a yellow diamond. We then compute moving averages in order to forecast likely market changes.

The red line is the one-year moving average of homes sold each month. Despite having an excellent recovery last year, this average continues to rise, which is very good news for the sluggish Tallahassee real estate market.

The red line is the five-year moving average, representing the average number of homes sold each month over the past five years. It has been on a slight growth trend since 2012 and will likely continue higher for the foreseeable future.

The blue line shows the ten-year moving average, measuring the average number of homes sold each month for the past ten years. It continues to decline, anchored by the strong years 2005 through 2007. It is likely the ten year average won't change direction for several more years.

We are finally starting to see some of the monthly numbers land above this the ten-year average, which must occur often before we will see the direction change.

How To Use This Information

If you are planning on selling a home in Tallahassee in the next few months, consider the following three statements and how they might relate to you and the home that you own:

Over the past year, the average number of homes selling each month is on the rise, meaning there are more buyers in the market today than there were last year.

Over the past five years, the average number of homes selling each month is on the rise, meaning there are more buyers in the market today than there were five years ago.

Over the past ten years, the average number of homes selling each month is declining, meaning there are fewer buyers in the market today than there were ten years ago.

If you bought your home ten years ago, buyers will not be behaving today like what you experienced back then. You have to key in to what buyers are doing today if you want to get top dollar for your home.

If you would like to know more about selling your home at its highest price, on your time schedule, just drop me a note and we can schedule a time to evaluate your home in today's market conditions.

For eight straight years we have published reports on real estate supply and demand in Tallahassee, and for all of this time ...

The supply and demand for housing in Tallahassee is following normal seasonal trends, meaning that the current supply of ...