Where The Existing Homes Are Selling In Tallahassee

Every month the National Association of Realtors publishes an existing home sales report, showing the regions of the US and the activity occurring among resale homes.

We have produced a similar report for the Tallahassee real estate market, identifying the top neighborhoods in our market area based upon the number of existing home sales (meaning excluding all new construction home sales).

This report has intrinsic value to both buyers and sellers alike, as it will show you where the best values are being found in 2014 by the purchasers who have already made their decisions.

The real estate graph below shows the most active Tallahassee neighborhoods when measuring the number of existing home sales that have closed through August 2014. 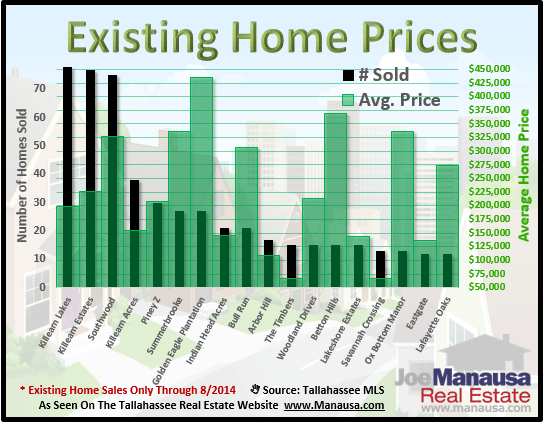 The usual suspects lead the pack when it comes to where homes are selling. Killearn Lakes Plantation, Killearn Estates, Southwood, Killearn Acres and Piney Z round out the top five. Golden Eagle Plantation currently holds the title for the highest average sales price ($435,600) among the neighborhoods which have posted at least 12 home sales through August.

The next graph in our report is organized like the one above, with the exception that instead of average home prices it shows the average home values, measured in price per square foot on the right vertical axis. 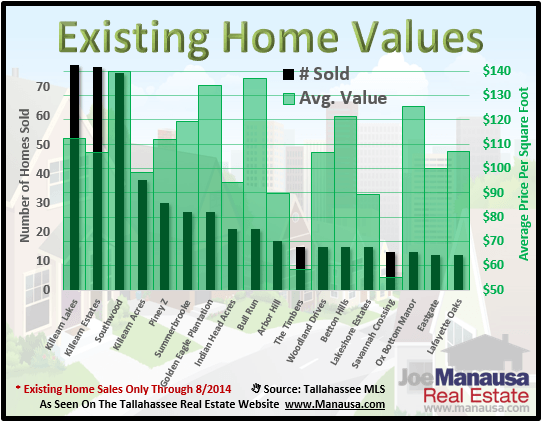 The two highest valued neighborhoods are not surprisingly two of the newer places to live in Tallahassee. Southwood and Bull Run feature existing home sales where the age of the homes is often less than 10 years.

Existing Homes Are Hot In Tallahassee

The average sales price in most neighborhoods is still down more than 20% since the peak of the market.

If you currently own a home and do not plan to move, you should take the time to find out if you can lower your rate and/or payment with a no-cost refinance. Make sure you get an assumable loan if possible, as it will be valued greatly in the future when interest rates rise.

If you are thinking about selling a home and plan on buying a replacement home, time is ticking. You need to sell your home and buy another before the post-election interest rate hikes reduce home affordability for both you and your buyer.

If you would like to know more about existing home prices and values in any Tallahassee neighborhood, just drop me a note and we will endeavor to get you the information that you seek.