Recently, a reader wrote in as a response to our article on the wave of foreclosures that is hitting Tallahassee and wanted to know if we could summarize the property traits that we are seeing in new lis pendens filings.

As a reminder, a lis pendens is a written notice that a lawsuit has been filed which concerns the title to real property. Basically, it means a lender is suing the property owner for default of a loan agreement. By looking at the new filings, we get a feel for the distressed properties that will be soon joining the list of homes for sale in Tallahassee.

Long time reader "DA" owns property in Tallahassee and wanted to know more about the composition of these new lis pendens filings. He wrote:

I was basically wondering if you can breakdown the characteristics of the properties that are in the impending foreclosure wave to determine how they compare to the inventory of properties currently for sale in Tallahassee or Tallahassee's overall housing stock in general. - D.A.

When we look at the graph of Tallahassee lis pendens by structure type above, we see that nearly 84% of filings were for single family detached homes, while 10% were for townhouses and roughly 7% were for condominiums.

As far as home sizes, there were no surprises here either. The real estate graph below shows the dispersion of lis pendens filings by the size (heated and cooled square footage) of the properties. 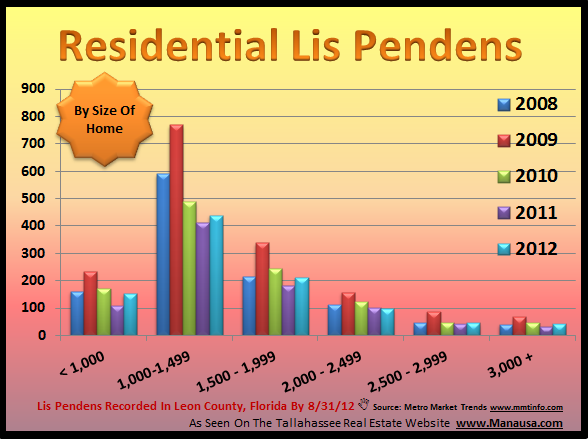 When we look at where Tallahassee lis pendens are located, one way to group them is by zip codes in Tallahassee. 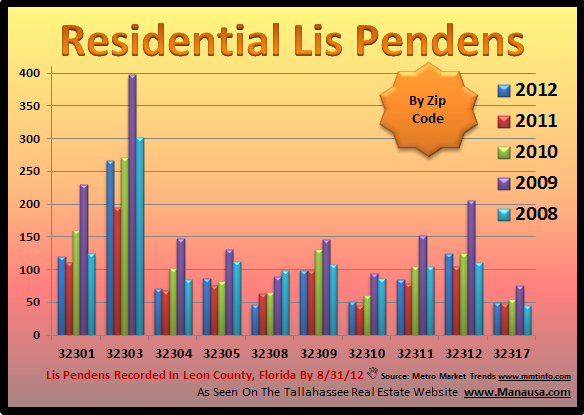 I would say that the only imbalance in the graph above is the level of foreclosures in the 32305 zip code appears far higher than the normal sales share that zip code holds in the Tallahassee real estate market.

We can also look at filings by Tallahassee neighborhoods (subdivisions), and the following graph is produced: 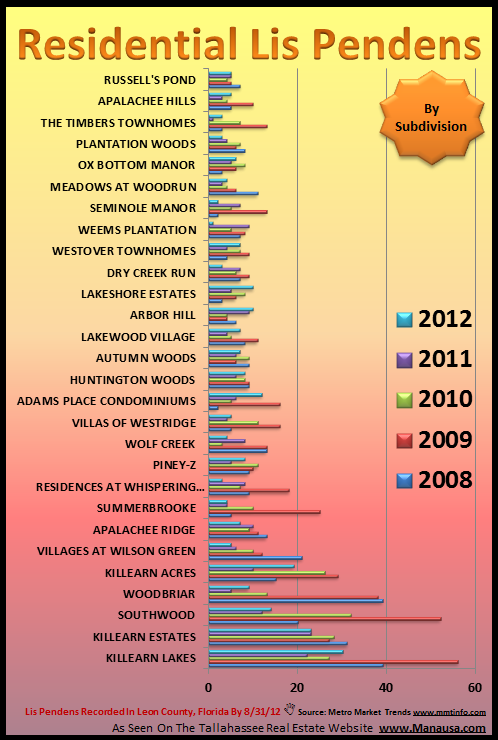 The subdivisions shown in the graph above represent 25% of all lis pendens filed in Tallahassee since 2008, with the heaviest served ones shown at the bottom. Woodbriar and the Villages at Wilson Green stand out as communities that have far higher than normal foreclosure to sales ratios.

Finally, "DA" wanted to know if there any specific age group (age of home) that was served lis pendens more than others. 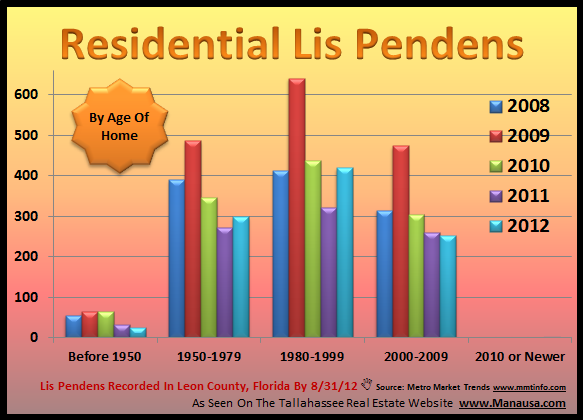 Again, nothing too surprising here except that only two homes built in 2010 or later have been served. I find that number a little low, even though were not very far down the road from when those homes were purchased. I suspect the 2000-2009 age group holds a larger percentage of lis pendens filings than they do of percentage of homes existing in the Tallahassee real estate market.

I think it's safe to say that we have so many lis pendens being filed now that these distressed properties are fairly representative of the entire market. Whether you look at size, location, zip code, age, or type, they are as much a part of the market as arms-length home sales. My forecast calls for greater than 50% of all sales will be distressed by late 2013.

Lis pendens filings can be considered the largest source of homes for sale in Tallahassee, and will dominate the housing market for several years.

Awesome info! You know me…I have to ask a question.

Also, how the data shows a hump in 2009….lots of Lis Pendens filed that year. Was there a corresponding hump for actual foreclosures last year, or are we in the middle of it now. What percentage of homes go from Lis Pendens to foreclosure? 90%?

Thanks Steve. The info for 2012 is through August, so yes the numbers will grow substantially.

Here's a graph that answers all of your questions, and currently 45% of Lis Pendens result in a foreclosure sale (up from 12-15% historically).