Just How Severe Is The Tallahassee Foreclosure Situation?

Just a few weeks ago, the Tallahassee foreclosure situation was highlighted when we reported a new all-time high number of new lis pendens filings.

And then recently, a long time reader of the Tallahassee Real Estate Blog asked for an update on the Tallahassee foreclosure situation, and he referenced my past articles which warned of the tidal wave of foreclosures heading our way. He wrote:

Hi Joe,  I know you did this awhile ago, but can you do another article walking us through the math of exactly how big the foreclosure wave is that is approaching Tallahassee. Thanks for keeping this site going. - TLHL

So how do we go about estimating the scope of this imminent problem?

As a starting point, I reviewed all lis pendens filings going back to January of 2008. I then filtered so that each property was only represented once (some properties have several lis pendens filed), and then compared these filings with sales during the same period of time.

I was looking to see how many of the properties that had started the foreclosure process have already been sold.

We can see this analysis in the real estate graph below, where both new lis pendens filings (red bars) as well as home sales after the filing (green bars) have been plotted.

The blue diamonds in the graph measure the percentage of homes sold after a lis pendens filing. The higher the percentage, the further along the neighborhood has gone to process the distressed properties. 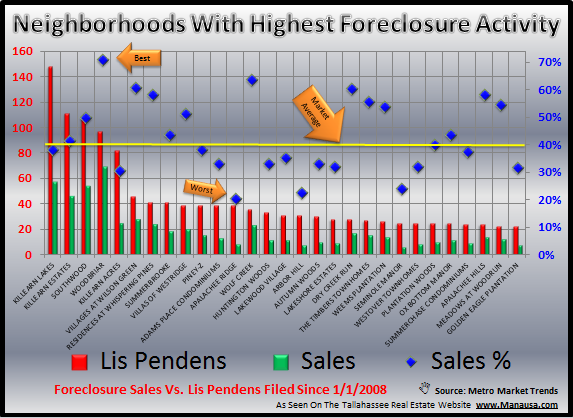 The yellow line in the graph above is the market average.

The strongest Tallahassee neighborhood in our report is Woodbriar, where 71% of all lis pendens filed have already resulted in a sale. The opposite end of the spectrum shows Apalachee ridge has only reported 21% of the homes with lis pendens having been sold.

Based upon the information above, there is more than a year's supply of distressed homes for sale in Tallahassee. Those 3,100 identified above are unfortunately being joined by many new ones. July set a record in new foreclosure filings, and the first week of August posted even more than its counterpart in July.

We should closely monitor these new lis pendens filings, as nothing should impede the progress of lenders to finally put the effort in to clearing out non-performing loans. Our ability to truly understand the Tallahassee foreclosure situation will not be crystallized until we see the number of new lis pendens filings begin a downward trend.

So to answer the question asked by our reader, the Tallahassee foreclosure situation is still expanding.

Whether you are a seller or a buyer, there are ways to take advantage of this information to best position yourself in the Tallahassee real estate market.

If you are curious about how to do this, just drop me a note and we can schedule a time to consider your best move based upon the Tallahassee foreclosure situation.

Thanks for the update. A few questions. Is it possible that some of the lis pendens houses are resolved as short sales or is that already included in the graph? Second, is there any source that estimates the number of seriously delinquent loans (3 months late or more) in Tallahassee? I have seen LPS do that for states, but not regions.

TLH L: Short sales would appear in my analysis as sales ... so no change to what I wrote. There are companies you can find on Google that will sell you the information on mortgage lates @ about $1 per person. Last time I looked (December '11) there were over 1,000 properties with loan balances over $90K with delinquent mortgages (in Tallahassee), of which 156 were seriously delinquent.