As one of the "Big 3" developments in Tallahassee, Southwood dominates the Southeast quadrant of the Tallahassee real estate market.

Offering both an active Town Center as well as acres of green parks and walking trails, buyers are often drawn to Southwood for its thoroughly considered design. 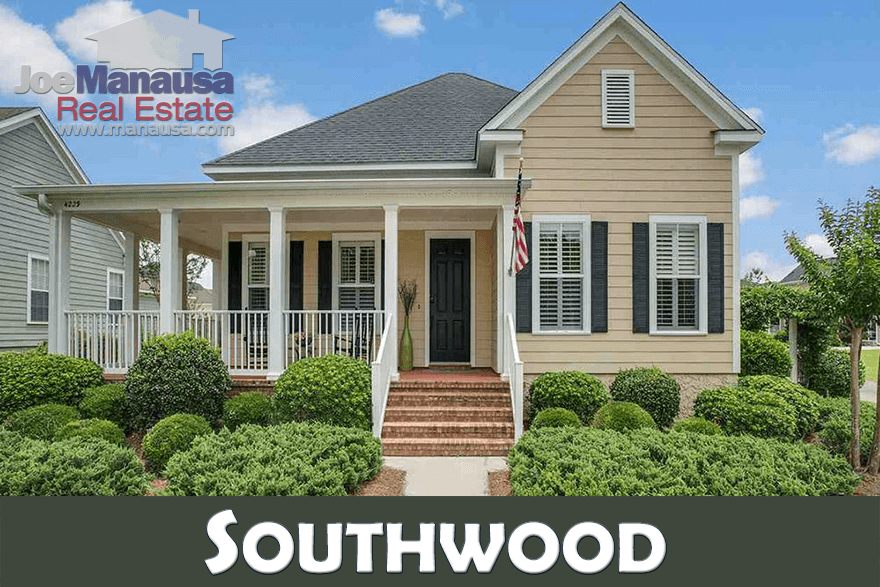 The following list of homes includes all active listings for sale in Southwood.

In this report, we will look at average home prices, home values, and home sizes in Southwood, as well as a table of nearly 3,000 closed home sales going back to when sales first began in Southwood.

It is important to note that the narrative contained below is for sales through December for all previous years, but through four weeks in September in 2017. The graphs and the closed sales table will be continuously updated into the future (meaning bookmark this page if you always want to know the current status of homes in Southwood).

Average home prices in Southwood are up 1% thus far in 2017 versus the average posted for the 2016 calendar year. Currently, the average Southwood home price is $322,347, and it is important to note that high end sales (those above $600K) are very rare. Southwood is an interesting neighborhood, so different than the rest of Tallahassee. It is prudent that interested buyers use the services of a dedicated real estate buyer's agent if when committed to buying a home in Southwood.

Activity in the Southwood housing market remains steady, but inventory is not moving as fast as we are seeing in other neighborhoods. Currently, there are 44 homes for sale in Southwood, but only 10 are under contract.

Homeowners should feel comfortable knowing that  existing homes are selling fast when an aggressive marketing plan is utilized.

Average home values are up almost three percent so far in Southwood this year when compared to the average in 2016. This is far lower than what we are seeing in most neighborhoods in town, though it does make sense. Over the past ten years, very few neighborhoods had much new construction going on. Southwood was an exception. So much of our measurement of value over the past ten years included new homes, whereas most other neighborhoods were merely resales. This pushed the average higher in the past with Southwood, thus comparing now with then returns a relatively small gain. We see similar results in Bull Run.

Through four weeks in September, the average value of a home sold in Southwood has been $150 per square foot.

The average home size sold in Southwood falls in a range of 1,900 to 2,300 square feet, and 2017 has results smack dab in the middle of this range.

The following list shows all 2,900+ home sales in Southwood going back to its first year of sales in 2001.

This concludes our October 2017 update on home sales in Southwood, please feel free to drop me a note if you have questions not covered in this report.