Located on the East side of Tallahassee just south of Buck Lake Road, Observation Pointe is a small community of newer homes built from 2007 through today, in a highly desirable part of Tallahassee.

As part of the small niche of new construction neighborhoods, Observation Pointe has been serving up new and like new homes for discriminating buyers who are willing to pay extra for that "new house smell" when they buy.

In this report, we will look at prices, values, and sizes of homes in Observation Pointe, as well as show current listings in the Tallahassee MLS and all closed home sales going back to 2007.

Average home prices have risen slightly since last year, due to the fact that the majority of sales in 2014 have been new construction. The average recorded sales price is $234,200 for Observation Pointe thus far in 2014. 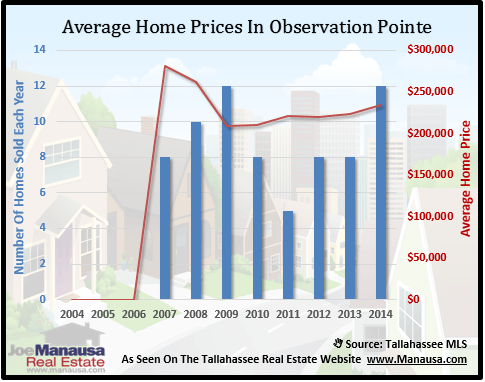 Home sales activity has done quite well this year, and will be the best year ever for recorded home sales by the time the year is through. Note that sales through October are already 50% higher than what was recorded in each of the previous two full calendar years. Thus far in 2014, there have been 12 closed home sales in Observation Pointe.

Average home values in Observation Pointe have bounced back this year after falling for the past two years and have climbed up from a low of $125 per square foot established in 2010. 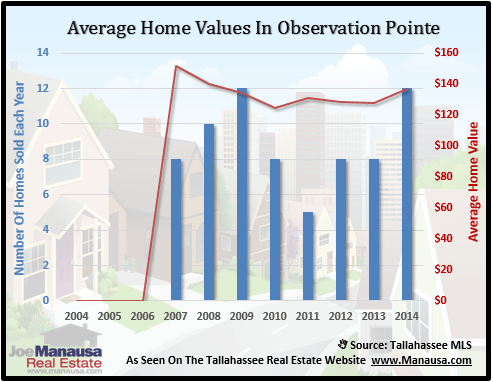 Through October, the average value of a home sold in Observation Pointe this year has been $137 per square foot. This is significantly higher than the value of existing home sales in the surrounding neighborhoods. Again, buyers here are paying a premium for newer homes, they need to plan on staying for more than 5 years if they want to gain an equity position before they sell.

The average home size sold in Observation Pointe typically falls in a range of 1,550 to 1,850 square feet, and this year home sales are right in the middle of this range. The 12 sales thus far in 2014 have averaged 1,710 square feet. 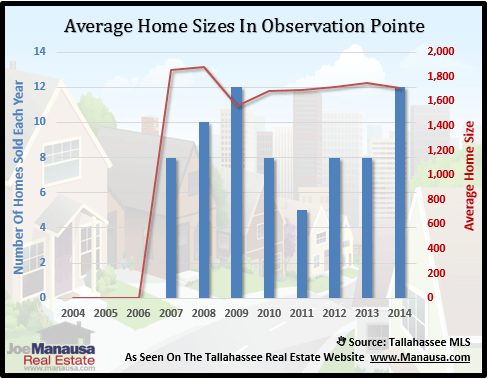 Observation Pointe continues to offer new homes for sale, so expect to see existing home sales have to compete on price (meaning homeowners will have to consider a significant discount to lure buyers away from the brand new homes).

Homes For Sale In Observation Pointe

The following list of homes are the most recent listings in Observation Pointe.

The following list shows home sales going back to 2002 in Observation Pointe.

I hope you enjoyed our October 2014 update on home sales in Observation Pointe, please feel free to drop me a note if you have questions not covered in this report.