Located at the top of the NE quadrant of Tallahassee, Killearn Lakes Plantation and its affiliated neighborhoods comprise the most active communities in the Tallahassee real estate market for the past 10+ years.

As I began my career in 1991 selling KLP homes and homesites, I have seen this area morph into a place that offers plenty of options for people wanting to live in the 32312 zip code.

Due to the segmentation of Killearn Lakes in the Tallahassee MLS, it "only" shows up among the top 3 neighborhoods each year. But when you include all of its enclosed communities (Deerfield Plantation, Deerwood Plantation, Golden Eagle Plantation, Killearn Commons, Kinhega Landing, Kinhega Oaks, Pine Landing, Scotswood, Seven Oaks, and The Glen at Golden Eagle) which are often reported separately, this area of Tallahassee is the most often chosen destination for Tallahassee home buyers.

In this report, we will look at prices, values, and sizes of homes in Killearn Lakes Plantation, as well as show current listings in the Tallahassee MLS and all closed home sales going back to 2002.

For all of the 3 real estate graphs provided in this report, you will see the number of closed home sales for each year (blue columns, measured on the left vertical axis), and an important real estate statistic shown in red (measured on the right vertical axis. It is important to note that sales are through December for all previous years, but through October in 2014.

Average home prices moved very little since 2009, reaching a market low in 2011 and recovering slightly since. Distressed sales are occurring at a rate consistent with other neighborhoods in Tallahassee, and is bringing down the average home sales price by more than 10 percent. The average recorded sales price is $202,500 for Killearn Lakes Plantation thus far in 2014. 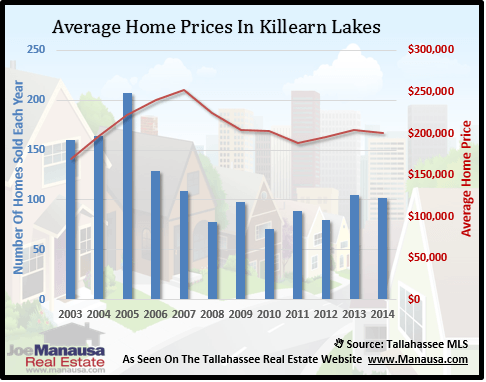 Home sales activity this year appears to be better than what we have seen over the past seven years, but still well below the levels recorded during the most active years from 2002 through 2006. Thus far in 2014, there have been 103 closed home sales in Killearn Lakes Plantation.

Average home values in Killearn Lakes have risen 9% since 2012, but have basically remained the same this year as they were last year. As distressed property sales begin to decline next year (hopefully), expect to see home values begin to rise significantly. 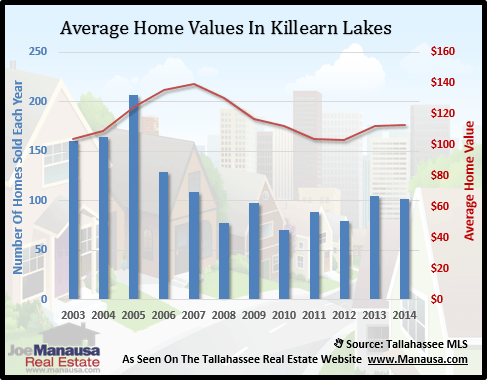 Through October, the average value of a home sold in Killearn Lakes Plantation has been $112 per square foot. This is up 9% over the bottom reached in 2012, but still down about 19% from the market high set back in 2007. This means that many homeowners who have purchased or refinanced in the past 8 years do not have equity in their homes.

The average home size sold in Killearn Lakes Plantation typically falls in a range of 1,700 to 1,900 square feet, and this year home size averages are fairly average year. The 103 sales thus far in 2014 have averaged 1,800 square feet. 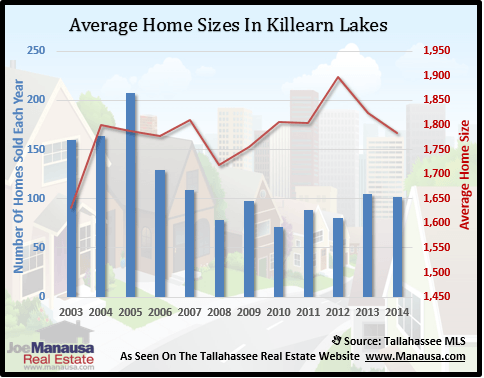 The following list of homes are the most recent listings in Killearn Lakes Plantation.

The following list shows home sales going back to 2002 in Killearn Lakes Plantation.

I hope you enjoyed our November 2014 update on home sales in Killearn Lakes Plantation, please feel free to drop me a note if you have questions not covered in this report. 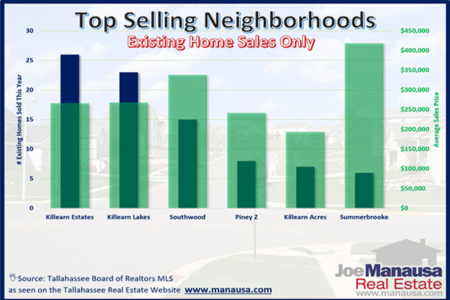 25% Of All Homes Sold Are In These 6 Tallahassee Neighborhoods

Home sales are up nine percent through February when compared to the same time last year, yet a full quarter have come from ...

There are 56 homes for sale right now in Killearn Lakes Plantation, the hottest neighborhood in the 32312 zip code.With ...