Located in Northeast Tallahassee, Eastgate serves up an excellent sampling of median priced homes with the added benefit of being located in a highly desired part of town.

Eastgate is convenient to shopping and with quick access to both the Interstate and Capital Circle NE, you can be just about anywhere around Tallahassee in less than 15 minutes from your home.

It's hard to find a home for under $200,000 in Tallahassee's popular Northeast quadrant, but Eastgate stands ready to fill the order.

In this report, we will look at home prices, home values, and sizes of homes in Eastgate, as well as show current listings in the Tallahassee MLS and all closed home sales going back to 1991.

For each of the three real estate graphs found in this report, you will find the number of closed home sales for each year (blue columns, measured on the left vertical axis), and an important real estate statistic shown in orange (measured on the right vertical axis. It is important to note that the analysis of the information that we provide is current through the first week of May 2015.

Last year's pace of home sales was the best Eastgate has seen since 2001, but this year has started off slowly. With only one home sold and just three more on the market, 2015 looks to be a slower year for Eastgate.

Congressman Tom Reed (R-New York) introduced the Mortgage Forgiveness Tax Relief Act of 2015 (H.R. 1002) on February 13, and that bill is now being heard in the House Committee on Ways and Means. Two weeks later, Senators Debbie Stabenow (D-Michigan) and Dean Heller (R-Nevada) introduced a similar bill (S. 608), which is currently in the Senate Banking Committee. Both bills would extend relief to homeowners on forgiven mortgage debt through 2016. The bills would allow homeowners to exclude the forgiven debt from federal income tax forms and not report it as earned income. [Debt Relief Act]

Average home values in Eastgate rose 15% in 2014, bringing averages back to levels last seen in 2008.

The one sale of 2015 was recorded at $140 per square foot, which is higher than the average recorded at the peak of the market in 2006.

The average home size sold in Eastgate typically falls in a range of 1,200 to 1,500 square feet, but this year's one sale would represent the lowest on record at 1,143 square feet. I suspect we'll see the average size of homes move back up into the normal range once a few more sales are recorded.

Homes For Sale In Eastgate

The following list shows home sales going back to 1991 in Eastgate.

I hope you enjoyed our May 2015 update on home sales in Eastgate, please feel free to drop me a note if you have questions not covered in this report. 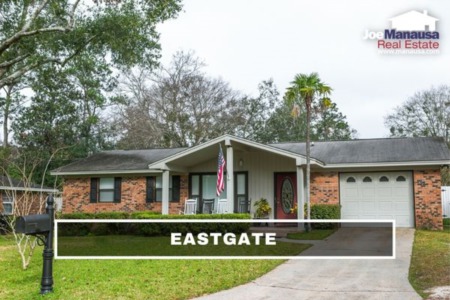 Eastgate is located on the east side of Capital Circle NE, just south of the Interstate, so its location is ... 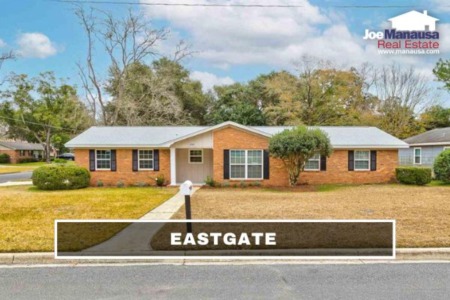 Eastgate remains an undervalued neighborhood in Northeast Tallahassee, with roughly 300 three and four-bedroom ...