If you head out Miccosukee Road and push north of I-10, you can find the Arvah Branch neighborhood filled with 97 executive level homes.

The homesites range from one to five acres each, so consider this a "must see" if you want a larger lot without giving up quick access to town. It's a great combination of land and location.

Due to the relatively low number of homes, Arvah Branch produces few enough home sales to get solid trend lines formed for prices and values, so make sure you work with an expert if you are considering a purchase there.

Arvah Branch is zoned for the following Leon County schools: 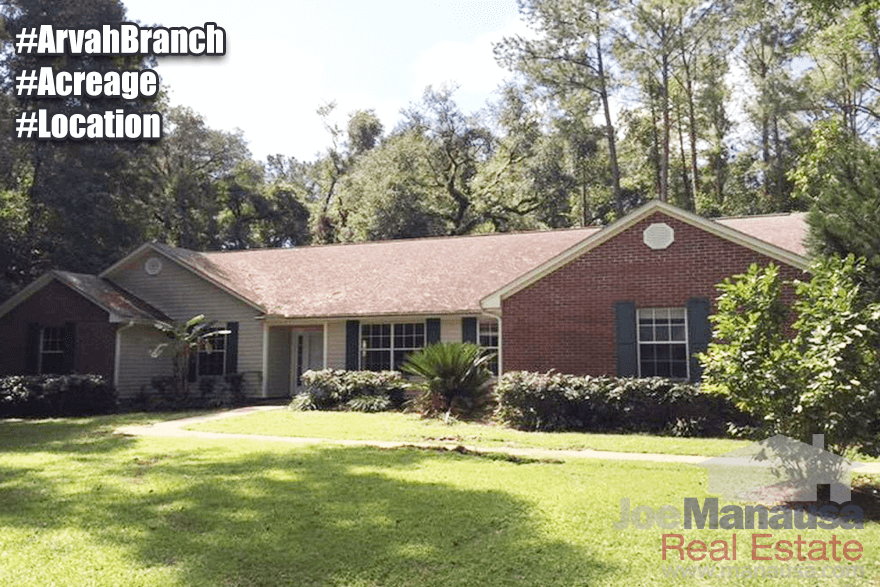 In this report, we examine average home prices, values, and sizes in Arvah Branch, as well as all closed home sales going back to 1991.

It is important to note that the narrative contained below is for sales through December for all previous years, but through October in 2016. The graphs and the closed sales table will be continuously updated into the future (meaning bookmark this page if you always want to know the current status of homes in the Arvah Branch).

Home sales activity in Arvah Branch is sporadic due to its relatively small size. New construction has a big impact on average prices when 20% of all homes sold (1) are brand new.

Average home values in Arvah Branch also have skyrocketed, up 33% over last year's values. Just as we saw with average prices, average values are highly influenced by the one new construction sale. But there's another factor at play here too. Last year had several distressed properties sold and as they have gone away, higher values have prevailed.

The average home value in Arvah Branch has been $134 per square foot in 2016, but the $182 per foot on the new construction sale has skewed what would likely be an average resale value around $122 per square foot (still a healthy appreciation of 21% over last year).

The average home size sold in Arvah Branch typically falls in a range of 1,800 to 2,400 square feet, and this year is no different.

The following list shows more than 200 home sales in Arvah Branch going back to 1991.

I hope you enjoyed our November 2016 update on home sales in Arvah Branch, please feel free to drop me a note if you have questions not covered in this report.

Arvah Branch is a smaller neighborhood located in NE Tallahassee filled with executive level homes on one to five acre ...

Arvah Branch is a great little neighborhood of just under 100 homes, located in Northeast Tallahassee. If you travel ...