Located in Northeast Tallahassee well inside of I-10, Waverly Hills delivers homes built in the 1960s and 1970s in a highly desirable part of Tallahassee.

Though I haven't lived there since 1965, I am in and around Waverly Hills quite often as it is located less than a mile North of the Joe Manausa Real Estate office.

In this report, we will look at prices, values, and sizes of homes in Waverly Hills, as well as show current listings in the Tallahassee MLS and all closed home sales going back to 2002.

What was once a 420 acre, 1850s hunting and farming plantation, was transformed 100 years later in to a family neighboorhood, designed to compliment the patriarch oaks, gracious magnolias, towering pines, rolling hillWaverly Ponds, streams and pond that graced its meandering landscape. It was named Waverly Hills, with streets titled after Sir Walter Scott novels. Twelve of the orignal homes were showcased in Tallahassee's first ever Parade of Homes. Today, Waverly Hills is comprised of over 400 homes, and is one Tallahassees most stable, picturesque, and greatly desired neighborhoods. It's close proximity to downtown Tallahassee, Market Square, and easy access to I10, Thomasville Rd, Meridian Road, Capital Circle & Blairstone Expressway, offer a central location from which to reach work, shopping and leisure locations with ease. Zoned for some of the area's best schools, and with an active neighborhood association arranging activities for young and old alike, Waverly Hills is the perfect place to reside. - Waverly Hills Neighborhood Association

Home prices have fallen slightly since last year, making this a very affordable mid-town location for buyers looking to spend $200,000 to $300,000. The average recorded sales price is $250,500 for Waverly Hills thus far in 2014. 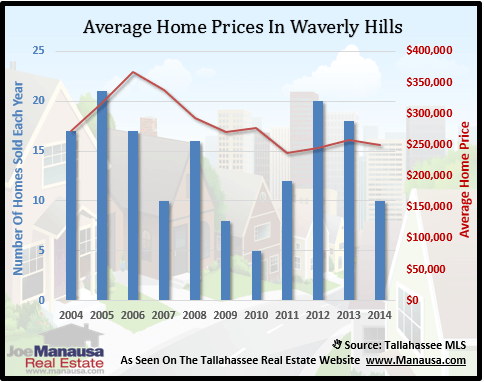 Home sales activity has declined significantly last year, though it is not necessarily indicative of a negative trend. Note that the number of homes sold over the past two year were nearly identical to those recorded at the peak of the housing market. This year could simply be cooling off because fewer homeowners in Waverly Hills need to move. Thus far in 2014, there have been 10 closed home sales in Waverly Hills.

Average home values in Waverly Hills have remained fair stable for the past three years, having climbed up from a low of $91 per square foot established in 2011. 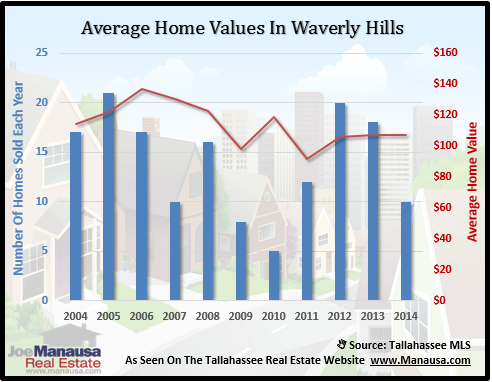 Through mid October, the average value of a home sold in Waverly Hills this year has been $107 per square foot. This is about 22% cheaper than the values recorded when the housing market topped out at $137 per square foot in 2006.

The average home size sold in Waverly Hills typically falls in a range of 2,300 to 2,700 square feet, and this year home sales are most active at the lower end of this range. The 10 sales thus far in 2014 have averaged 2,336 square feet, suggesting that buyers are "reaching up" to get into Waverly Hills. 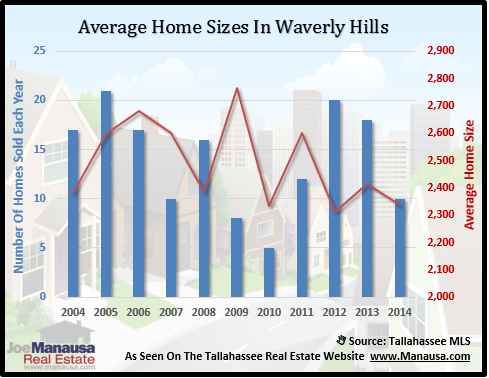 Understanding the kind of "deal" this is for buyers is simple. These 2,300 square foot + homes are selling for roughly $100,000 less than are similarly sized new homes, and most would argue that these are in a far more desirable location. Waverly Hills continues to offer incredible value for buyers ready to make a move.

The following list shows home sales going back to 2002 in Waverly Hills.

I hope you enjoyed our October 2014 update on home sales in Waverly Hills, please feel free to drop me a note if you have questions not covered in this report.