With just 8 short years of home sales under it's belt, Observation Pointe has posted its strongest year ever in 2014.

Located in the 32317 zip code on the east side of Tallahassee (south of Buck Lake Road), Observation Pointe is a small community filled with new and like-new homes.

Like several other neighborhoods that were born during the real estate market expansion, Observation Pointe's existing owners might end up all trying to sell their homes at roughly the same time due to normal ownership cycles. This "boom neighborhood" effect is something that we'll keep an eye on for the next several years.

In this report, we will look at prices, values, and sizes of homes in Observation Pointe, as well as show current listings in the Tallahassee MLS and all closed home sales going back to 2007.

For all 3 real estate graphs below, you will find the number of closed home sales for each year (blue columns, measured on the left vertical axis), and an important real estate statistic shown in red (measured on the right vertical axis. It is important to note that sales are through December for all previous years, but through mid February in 2015.

Average home prices rose 5% last year, due to the fact that the majority of sales in 2014 were new construction. The average recorded sales price was $234,200 for Observation Pointe in 2014. 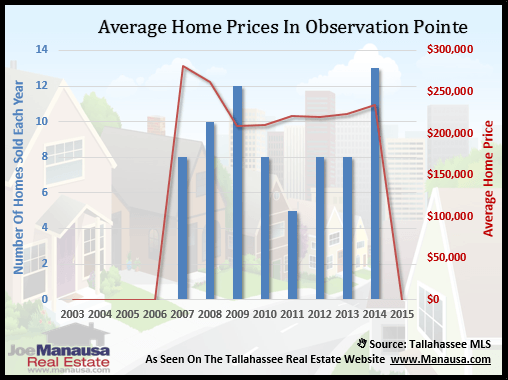 There were 13 closed home sales in Observation Pointe last year, the most in any year, but we have not yet seen a sale in 2015.

Average home values in Observation Pointe recovered 7% in 2014 after falling for the previous 2 years. 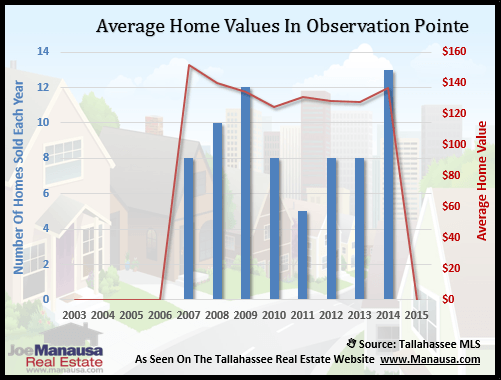 Home values were higher than ever in 2014, with the average value of a home sold in Observation Pointe being $137 per square foot. This is significantly higher than the value of existing home sales in the surrounding neighborhoods. These buyers have been paying a premium for newer homes, so they need to plan on staying for more than 5 years if they want to gain an equity position before they sell.

The average home size sold in Observation Pointe typically falls in a range of 1,550 to 1,850 square feet, and this year home sales are right in the middle of this range. 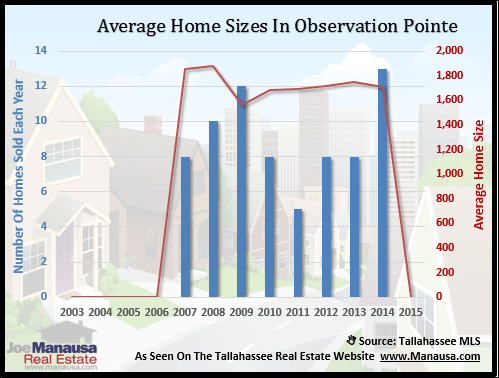 Observation Pointe continues to offer new homes for sale, so expect to see existing home sales have to compete on price (meaning homeowners will have to consider a significant discount to lure buyers away from the brand new homes).

The following list of homes are the most recent listings in Observation Pointe.

The following list shows home sales going back to 2002 in Observation Pointe. Note that you can sort the information by any column (for example, click on the closing date to see the most recent home sales first).

I hope you enjoyed our October 2014 update on home sales in Observation Pointe, please feel free to drop me a note if you have questions not covered in this report.