Located on the SE side of Tallahassee out Apalachee Parkway just beyond Conner Blvd., Hampton Creek offers and assortment of newer townhouses and single family detached homes.

Hampton Creek has homes built from the 2005 through 2012, with the types of amenities that attracted buyers willing to pay for the bells and whistles of a new home at the height of the housing market bubble and then during its collapse. Just as we have reported for other "boom neighborhoods," it also means that there will be natural move cycles hitting many of the homeowners here at the very same time. Hopefully the market will recover enough to take them in stride.

In this report, we will look at prices, values, and sizes of homes in Hampton Creek, as well as show current listings in the Tallahassee MLS and all closed home sales going back to 2002.

For each of the three real estate graphs included in this report, you will find the number of closed home sales for each year (blue columns, measured on the left vertical axis), and an important real estate statistic shown in red (measured on the right vertical axis. It is important to note that sales are through December for all previous years, but through October in 2014. 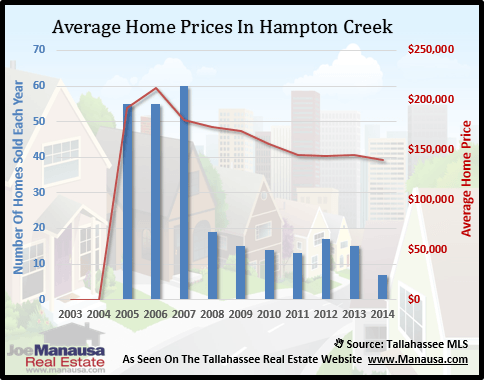 Home sales activity this year is at an all time low, with none of the 7 current homes for sale yet to be placed under contract. Thus far in 2014, there have been 7 closed home sales in Hampton Creek. 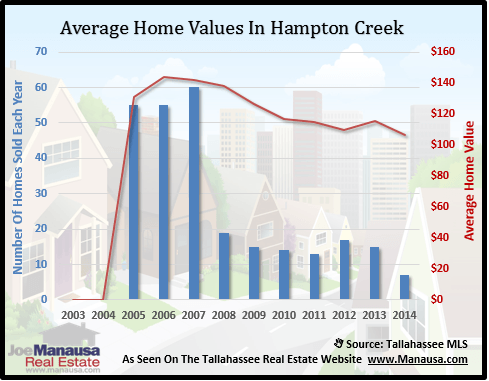 Through October, the average value of a home sold in Hampton Creek has been $106 per square foot, an all-time low. This means that many homeowners who have purchased or refinanced in the past 9 years are likely at zero or negative equity situations.

The average home size sold in Hampton Creek typically falls in a range of 1,200 to 1,500 square feet, and this year home size averages are right in the middle of this range. The 7 sales thus far in 2014 have averaged 1,321 square feet. 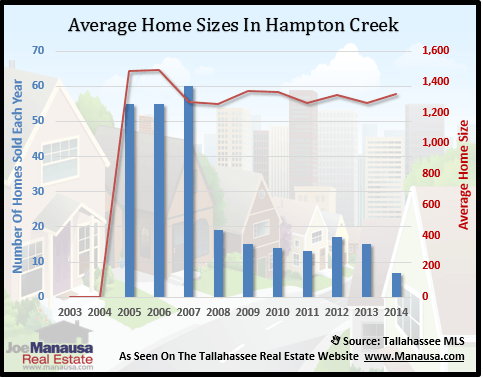 Homes For Sale In Hampton Creek

The following list of homes are the most recent listings in Hampton Creek.

The following list shows home sales going back to 2005 in Hampton Creek.

I hope you enjoyed our November 2014 update on home sales in Hampton Creek, please feel free to drop me a note if you have questions not covered in this report.