Located in Northeast Tallahassee along the highly prized Thomasville Road corridor, Foxcroft offers some of the most sought-after homes in town.

If you have you heart set on being in the NE Tallahassee quadrant, and you want to find something at or near $200,000, take a close look at Foxcroft because you are likely to find a gem.

In this report, we will look at prices, values, and sizes of homes in Foxcroft, as well as show current listings in the Tallahassee MLS and all closed home sales going back to 2002.

Home prices rebounded strongly this year, with average prices likely to close at a six year high. The average recorded sales price is $210,000 for Foxcroft thus far in 2014. 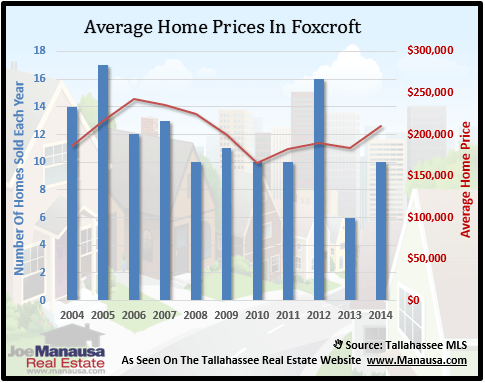 Average home values in Foxcroft have risen again this year after a small decline in 2013, and they currently are substantially higher than the 11 year low established in 2010. 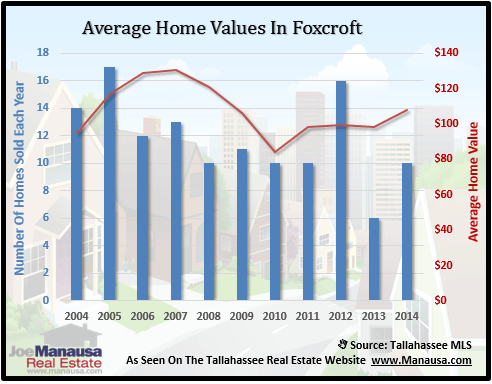 Through September, the average value of a home sold in Foxcroft this year has been $108 per square foot.

The average home size sold in Foxcroft typically falls in a range of 1,800 to 2,000 square feet, and this year is no different. The 10 sales thus far in 2014 have averaged 1,950 square feet, meaning buyers are choosing the larger homes due to cheap money and great values in the neighborhood. 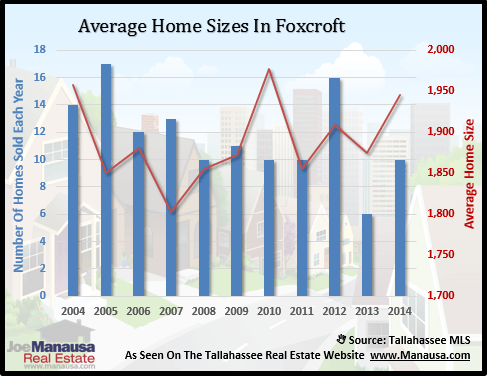 The following list of homes are the most recent listings in Foxcroft.

The following list shows home sales going back to 2002 in Foxcroft.

I hope you enjoyed our October 2014 update on home sales in Foxcroft, please feel free to drop me a note if you have questions not covered in this report.