One question that out-of-town homebuyers always get around to asking is "what are the top neighborhoods in Tallahassee."

Of course, my answer is always "it depends." Everybody has their own wishes, wants and desires, so I would think the top neighborhoods in Tallahassee could be defined in different ways for different people.

For example, a young family might favor a neighborhood with a park, whereas a single professional might prefer access to restaurants. It all really comes down to the needs of the homebuyer.

But many of them also want to know where "everybody" is moving, so I show them this graph of the top neighborhoods in Tallahassee, based on the number of closed home sales each one has reported year to date.

Graph Of Top Neighborhoods In Tallahassee 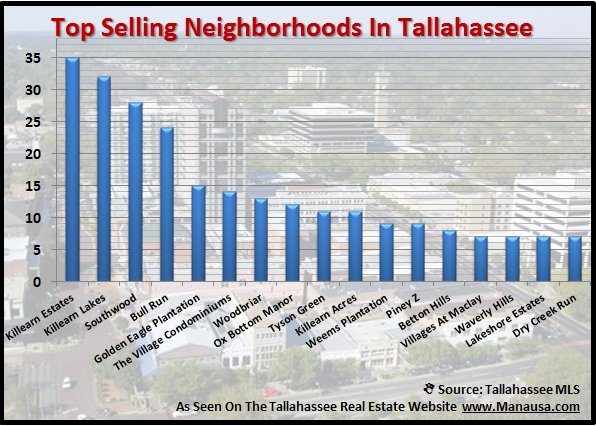 Thus far in 2012, the usual suspects lead the top five, though a typical top six finisher (Killearn Acres) has dropped all the way to the number ten position. Killearn Estates has started strong with 35 home sales through May, while Killearn Lakes follows close behind with 32. Southwood, the previous year's leader, has dropped to third and has recorded just 28 home sales through May. Bull Run and Golden Eagle Plantation round out the top five.

Our report makes it clear that perennial favorites continue to be the most active for home sales in Tallahassee. But that does not mean a wise buyer is only looking at homes in these limited locations.

So yes, you can find plenty of homes for sale in the more popular subdivisions, but there are even more in the lesser known neighborhoods.

So take some exploring all the wonderful communities around Tallahassee, then make your own choices for the top neighborhoods in Tallahassee.