Home Sales Are Booming In The Bobbins In 2015

If you are seeking luxury homes in Tallahassee, then the three "Bobbins" (Bobbin Brook, Bobbin Trace, and Bobbin Mill Woods) deliver some of the finest homes in our area.

The Bobbins are conveniently located (just north of I-10 on the south side of Maclay Road), and homes are each situated on more than an acre of land.

With mortgage interest rates remaining near all-time lows, these high end homes are selling at a rate that appears as good as ever.

In this report, we will look at average home prices, average home values, and average home sizes in the Bobbin neighborhoods, as well as show current listings in the Tallahassee MLS and all closed home sales going back to 1991.

For the real estate graphs found in this report, you will find the number of closed home sales for each year (red columns, measured on the left vertical axis), and an important real estate statistic shown in blue (measured on the right vertical axis. It is important to note that the analysis of the information that we provide is current through the second week of May 2015.

Average home prices move around a lot in these three subdivisions, mostly due to the relatively few number of homes selling each year. When a "big one" sells for over $1M, it quickly brings the average way up, and conversely, when most the the typical homes here sell, the averages return towards a more realistic level of the Tallahassee real estate market. Overall, average home prices in the Bobbin neighborhoods appear to be recovering in 2015.

The average recorded sales price through mid-May has been $646,800 for Bobbin Brook, Bobbin Trace, and Bobbin Mills Woods, and already 8 homes have sold.

The pace of home sales in 2014 (4) was the second lowest year on record, but 2015 is a different story altogether. Low interest rates have made these homes affordable to many more people than what we expect to see when rates return to "normal" levels, and if the current pace continues, 2015 might end up being the best year on record for the number of homes that sell in these three neighborhoods.

Average home values in the Bobbins are impacted by low liquidity much in the same was as described above for home prices. Additionally, when new construction is reported, it sometimes is shown without the land value (as I suspect is the case for the new home sold this year). Even taking this into account, we are seeing home values continue to decline in the Bobbins, just as we are in other high end home locations.

Remember, nearly half of all high end homebuyers are choosing new construction, so even as the rest of the market is recovering, the inventory of luxury homes is growing. So long as mortgage interest rates stay below 4%, I suspect this trend will continue. Buyers and sellers alike need to consider the eventual market for these homes when rates return to "normal."

The average home size sold in the Bobbins typically falls in a range of 3,500 to 5,000 square feet, and 2015 seems to be falling right in the center of this range.

The 8 Bobbin neighborhood home sales in 2015 have averaged 4,230 square feet.

I hope you enjoyed our May 2015 update on home sales in Bobbin Brook, Bobbin Trace, and Bobbin Mills Woods, please feel free to drop me a note if you have questions not covered in this report. 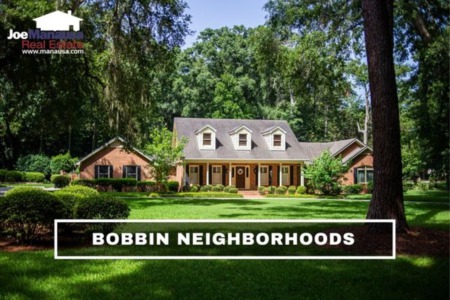 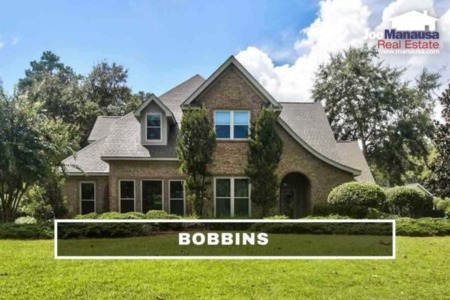