Cameron Chase is a relatively new community, featuring homes built during the "boom" of the housing market from 2002 through 2005. As the southern boundary of Killearn Estates, this neighborhood was an instant success the day it opened for sales.

The only downside to exploding sales that all occur at roughly the same time, you end up with a first generation of homeowners who are all on similar move cycles. For the demographic found in Cameron Chase, we can expect the "normal" move cycle to be 7 to 10 years. This means that the majority of homeowners were wanting to move from 2010 to 2015 (during the bottom of the housing market).

It is highly likely that this neighborhood suffers from pent-up supply, as many of its residents are still underwater with their loans. On a positive note though, Cameron Chase is in a high demand area and a high demand price range, so my concern for this "boom neighborhood" is less so than for several others created during the same time period.

In this report, we will look at average home price trends, value trends, and show the current listings in the Tallahassee MLS and all closed home sales going back to the first one in 2002.

It is important to note that the narrative contained below is for sales through December for all previous years, but through the fourth week of June in 2015. The graphs and the closed sales table will be continuously updated into the future (meaning bookmark this page if you always want to know the current status of homes in Cameron Chase).

Average home prices have not really moved much since the bottom was reached in 2012, with the average up less than 2%. The average recorded home sales price through June in 2015 is $214,250.

Home sales activity appears to be similar to last year, and this pace is but a fraction of the levels seen in 2003 and 2004. There were just 11 closed home sales in Cameron Chase in 2014, and 6 thus far through June in 2015.

Average home values in Cameron Chase are up less than 1% since 2011, the year values bottomed out. This means that values are similar to original values when purchased new in 2004 and down 22% since the peak in 2006. For those that refinanced or purchased since 2006, there is likely little or negative equity to allow for an easy sale.

Through June, the average value of a home sold in Cameron Chase has been $117 per square foot.

The average home size sold in Cameron Chase typically falls in a range of 1,800 to 1,900 square feet, and this year home sales are near the middle of this range.

Just as we have warned with other "boom neighborhoods," there would be too much seller competition if dozens of homeowners decided to move at the same time. Fortunately, as this article is written, there is only one home for sale in Cameron Chase. Additionally, with a highly sought location and proximity to Killearn Estates, I don't think homeowners in Cameron Chase should be too concerned right now.

I hope you enjoyed our June 2015 update on home sales in Cameron Chase, please feel free to drop me a note if you have questions not covered in this report. 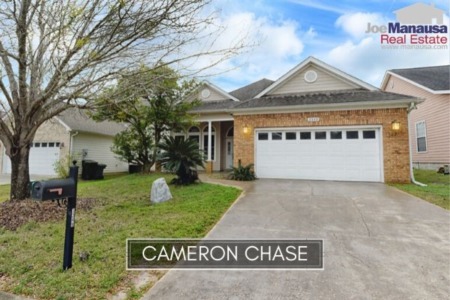 Cameron Chase is a small but popular Tallahassee neighborhood located on the west side of Centerville Road just ...