Yesterday's report of plummeting foreclosures in Tallahassee has raised some interesting discussion from real estate professionals around the internet. I'm not sure if you caught the recent Tallahassee Foreclosure Report, but yesterday it reported

New lis pendens filings in Tallahassee dropped 48% in February when compared to February 2010, and foreclosures fell 18%.

So not only were new foreclosure filings in February about 1/2 of what they were last year, but foreclosure sales dropped dramatically as well. So what does this mean?

There is a "Foreclosures" tab in the navigation bar at the Tallahassee Real Estate Website that you can select to see the most updated reports on Lis Pendens filings in Tallahassee. This is a very popular destination for many visitors to our site, as it provides the most timely information about foreclosure filings in Tallahassee that you can find on the internet. Unlike a lot of the national sites that are updated many months after the fact, the Tallahassee Foreclosure Report provides weekly reports of filings as well as a synopsis of filings monthly, quarterly and annually. 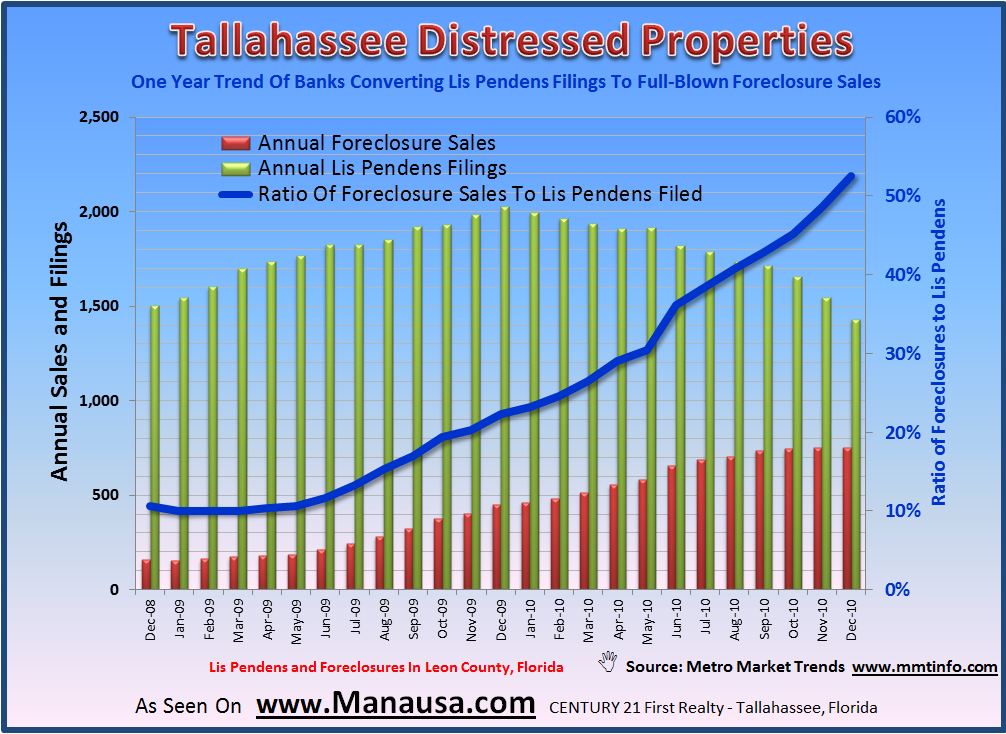 We also see a drop in the trend of both filings and sales. While many people are hoping this could be the beginning of the end of the massive distressed property problems in Tallahassee, others contend that we are just in a "cooling off" period for the banks. Yesterday, there was an interesting article by Tara Steele who believes that this is indeed not a recovery.

Tara believes that banks have been called to task by the courts and have had to rework their foreclosure processes, and this has caused a slow-down in the entire recovery. She wrote:

We predict these numbers will change dramatically as banks regroup and reformat their processes and as legislation on housing along with government sponsored programs continue to shape the real estate industry.

It makes a lot of sense, as many have followed the stream of reports of fraud by the mortgage companies and their attorney's who "robo-signed" documents to streamline the mortgage foreclosure process. Time will tell if that is the case in Tallahassee, all you have to do is monitor the Tallahassee Foreclosure Report in the weeks and months ahead.