Cay Newell was born and raised in Alabama, but has been a Floridian since her teens. After graduating from high school in Jacksonville, Florida, Cay attended Florida Junior College in Jacksonville, before joining the workforce.
She has worked in the real estate field for all thirty-five years of her professional career. Cay spent fourteen years on the lending side of real estate, working in all areas of lending. During her tenure with mortgage lending, Cay discovered her attraction to the closing aspect of the real estate process.
Cay moved to Tallahassee in 1990 with her husband Dave. They have three children, Caitlin, 27, works in Property Management; Emily, 23, works in the medical field; and Jacob , 19, is a Sophomore, attending the University of North Florida.
In 1994, Cay began working for the Department of Environmental Protection, Division of State Lands. Cay began her career with the DEP, as the Personal Assistant to the Division Director, working directly with Land Acquisition Agents, as well as State of Florida Cabinet Aides, to acquire State Lands to be used for Conservation purposes, or State Parks.
Cay moved to the Bureau of Land Acquisition, where she was responsible for the Closing Section for the Division of State Lands. In this role, Cay was responsible for ensuring the due diligence was performed for any contract approved by the Governor and Cabinet, and making sure all closings were completed in a timely manner.
After leaving the State of Florida, Cay worked as a Property Manager, responsible for over 250 rental properties. In 2015, Cay joined the Joe Manausa Real Estate team, as the Transaction Coordinator. Although it took her almost thirty-two years, Cay has finally found her final stop in her career.
When Cay isn't working, she loves spending time with her family and her fur babies, Bella and Honey.  Cay is an avid Auburn fan, so on any Saturday during the Fall, if she isn't attending an Auburn football game, she is somewhere watching her Tigers! 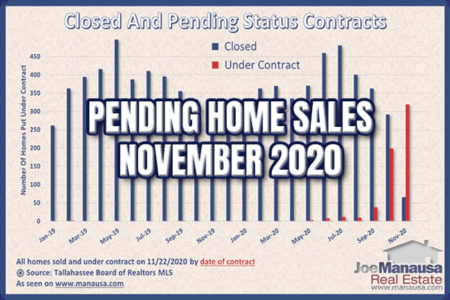 Welcome to the November 2020 Pending Home Sales Report for the Tallahassee real estate market. September through November have seen unseasonably strong buyer activity, resurrecting pandemic-slowed 2020 home sales to possibly post gains over last year. Who would have thought this possible when the pandemic came to town in early March? Today's report is a thorough examination of new contracts in ...