James, a native of the South, was born in Georgia and grew up in South Florida. James and his family enjoy the southern hospitality, beaches, and all the sunshine that Florida has to offer. After 3 deployments and a 3-year tour in Japan with the Navy, it was time for James, his wife, daughter, and dog to make a change and settle down.

Being a graduate of FSU, Tallahassee held a special place in his heart. After James met his wife Heather in Jacksonville, she loved coming to Tallahassee for the football games and is now pursuing a Doctorate of Nurse Practitioning with FSU.

Navy (April 2009-April 2017)
After bootcamp and advanced training, James found himself stationed in Brunswick, Maine with a Patrol and Reconnaissance Squadron known as VP-26, the Tridents. After his first deployment the squadron moved to Jacksonville, FL where James bought his first house and met his wife, Heather. His second deployment sent him to the Middle East where he got to enjoy 7 months of sharing a tent with 7 of his buddies. The third deployment sent his squadron to Asia, which is where he got a taste of what was to come.

While deployed, he received orders to pack up his family and move to an area near Tokyo, Japan within 4 months of his return to Jacksonville. James, with his work ethics and natural ability to lead, achieved the rank of First Class Petty Officer (E-6) in less than 5 years. With the new title, his family started their 3-year tour in Japan, where his daughter Ansley was born. During his off time, James competed in Captain’s Cup Sports, leading to multiple season victories in football, softball, and soccer. As a Youth Sports Dodgeball Coach, he led his team to victory; beating the Army and rest of the Navy in the region. With his contract coming up for renewal, James and Heather had a decision to make, stay in or get out? With much to consider, they decided it was best to end James’ active duty obligation and move to Tallahassee, where he can continue with the Navy Reserves.

FSU Circus Coach (September 2007-Spetember 2008)
After graduation, James was an Assistant Act Director with the Florida State University Flying High Circus. The summer of 2008, he got to perform and work as counselor at a summer camp that the circus was hosting in Panama City Beach.

College
Weeks after graduating from high school in South Florida, James packed his car and headed to Florida State to start his collegiate life. While at FSU, James was very active in sports, participating in intramural football, softball, and soccer. One day while in the gym his freshman year, he was approached and asked to join the Flying High Circus, the best collegiate circus in the country, and he asked himself “why not?”

He got to perform in a FSU football halftime show, annually at FSU, a roadshow in Tampa, and in Pine Mountain, Georgia at a resort called Callaway Gardens for 3 summers. While at Callaway Gardens, James worked as a summer camp counselor and performed 7 shows a week. Ask him how the circus helped the football team get its start. In 2007, he graduated with a B.S. in Criminology and a minor is Psychology.

Life
James enjoys outdoor recreation and sports. He grew up playing baseball and soccer as well as participating in Cub Scouts and Boy Scouts. In 2001, James became an Eagle Scout. His summers were spent camping all over the country, baseball camp, and working in the family glass shop in California. Working with family, he learned a lot about hard work, having a passion for what you do, and to never stop making yourself better.

James also found his passion for classic cars, Jeeps, and trucks. These days, you can find James spending time with his family outside, playing with his daughter, running with his dog, on the trails with his Jeep (or in the garage fixing it), in the gym, at the beach, or at a FSU football game teaching his daughter the Warchant.

James enjoys helping others and striving to make the world a better place for his kids to grow up in. He has the drive and determination to succeed in any facet of life. James and the team at JMRE will help you every step of the way to your next home purchase. 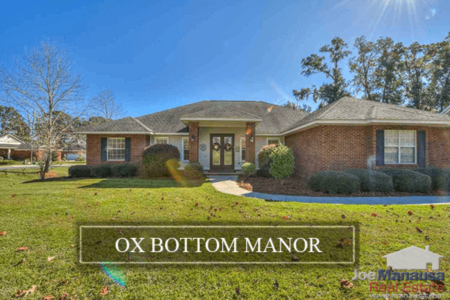 Ox Bottom Manor is a popular NE Tallahassee neighborhood in a high-demand location due to its access to A-rated public schools and a short commute to just about anywhere in Tallahassee. Here you will find more than 700 five, four, and three-bedroom homes that were all built within the past 30 years, making this a virtual hotspot on many homebuyers' maps today. Homes For Sale In Ox Bottom ...